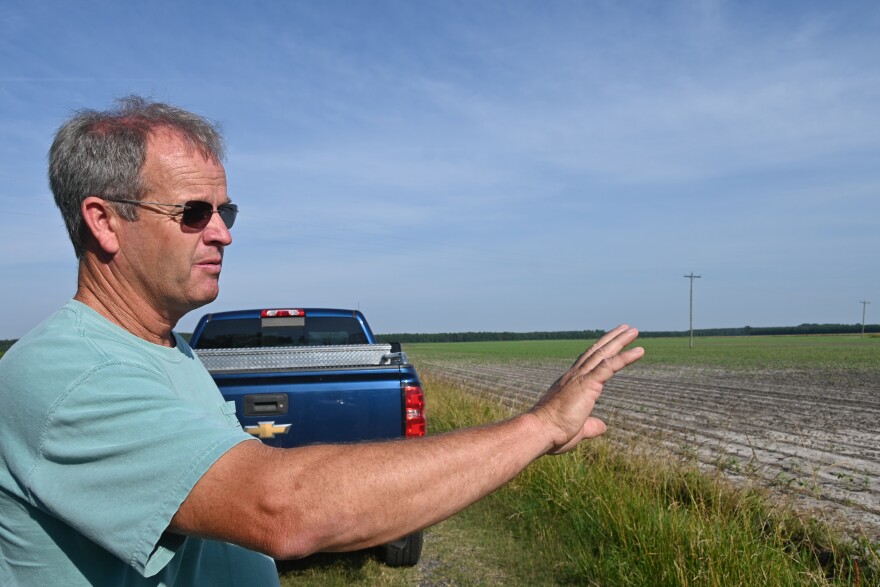 ENGELHARD, NC — Earl Pugh's house looks out over some of the machinery, sheds and fields of Middle Creek Farms, where the retired farmer's son now manages the cultivation of crops from the family's productive soil.

A stone's throw from the house, Pugh, also a three-term Hyde County commissioner, pointed to a rising threat to farming in a coastal region where the soil is so rich and dark it's called the Blacklands. Salt was taking a bite out of a field of cotton seedlings.

"As you look down the field, you can see the cotton is coming up and then there's several spots on this end of the field where you see just barren land," Pugh said. "That's from saltwater intrusion."

To adapt to the saltiness that's increasingly affecting coastal farmland, Pugh and others are turning to the government to convert swaths of it back to wetlands in exchange for modest payments. The restored wetlands are helping farms back away from rising water levels in the Pamlico Sound while providing natural protection from sea-level rise and salty high tides and storm surges.

As seas rise, demand for such programs is spiking in the region, but funding limitations are hampering the efforts. Some groups are pushing for an aggressive expansion in the next federal Farm Bill, characterizing the programs as rural climate adaptation strategies.

Flooding and saltwater have affected this isolated landscape since Pugh's grandfather began farming it in the 1920s. "It's nothing new," Pugh said. "It just seems to be getting a little bit worse all the time."

Pugh's son grows wheat, corn, soybeans, cotton, potatoes, green beans, broccoli and Mattamuskeet sweet onions on 7,000 acres of owned and leased land. As the farm has grown over the past century, federal tide gauge data indicates nearby water levels in the salty sound nearby have risen by more than a foot.