Mid-Atlantic
The yellow numbers and arrows indicate the areas and amounts of sand in cubic yards planned for nourishment of Emerald Isle beaches. At the top are geographic descriptions of the areas. Graphic: Carteret County Shore Protection Office 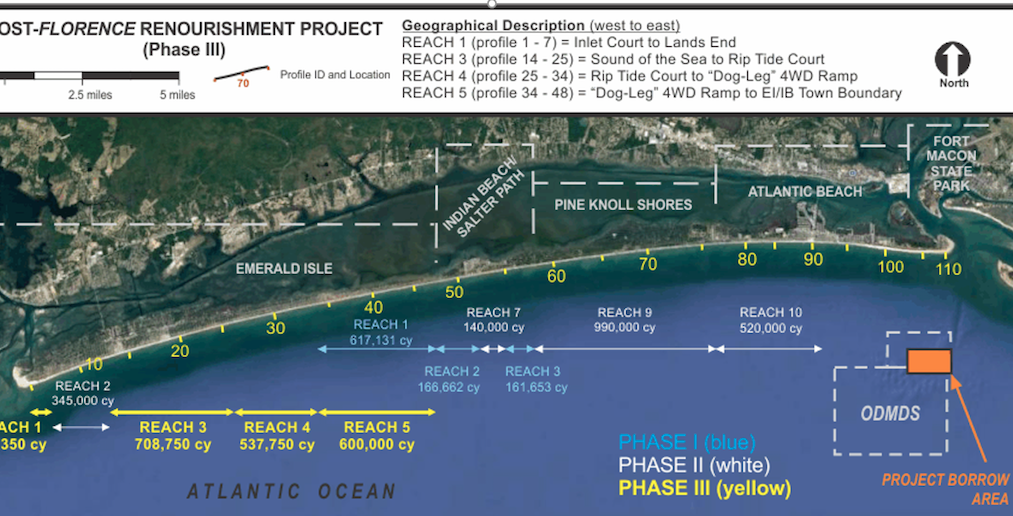 EMERALD ISLE — It’s been about two months since the last Bogue Banks beach renourishment project ended April 29, but Carteret County officials are moving to go out for bids for the third phase of what’s known as the post-Hurricane Florence project.

Greg Rudolph, manager of the County Shore Protection Office, said Thursday he hopes to release the bid document for the project to potential contractors Thursday and have a bid opening by July 30.

If the county gets bids from three companies, they can be opened that day, but if there are fewer bids, the project will have to be readvertised for a week.

“Our (engineering) team at Moffatt & Nichol is furiously preparing the plans and contract documents,” Rudolph said. “The bid solicitation schedule isn’t quite set in concrete yet,” but the idea is to get the bid documents out and award a contract as soon as possible, as that generally results in lower bids and a more favorable contract.

In addition, Rudolph said, the project is to include central Emerald Isle, which has not had its beaches nourished in years, and maybe a small portion of eastern Emerald Isle nourished in 2019 but considered a “hot spot” for erosion.

Without going into detail, Mr. Rudolph said engineers at Moffatt & Nichol are “exploring different beach-fill geometries” for eastern Emerald Isle in an effort to find a way to address the hot spot.