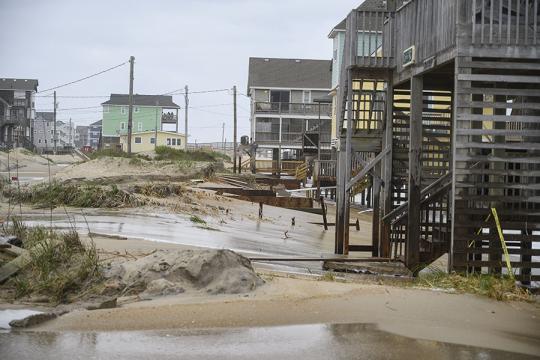 Millions watched the videos of a house falling into the Atlantic Ocean in May, the third this year, but now several more houses in Rodanthe on the Outer Banks are in danger of meeting the same fate.

RODANTHE, N.C. — When multiple houses along a stretch of the Outer Banks fell into the ocean earlier this year, it captured national attention. Now, as even more homes are at risk of being taken, groups are coming together to figure out how to keep the homes standing.

Millions watched the videos of a house falling into the Atlantic Ocean in May, the third this year, but now several more houses in Rodanthe on the Outer Banks are in danger of meeting the same fate.

“We’re on a section of shore that experiences very high erosion rates," said Alyson Flynn, a coastal advocate. "These homes, while they might not have been built this close to the ocean years ago, over time the beach has eroded so quickly and so dramatically that these homes are literally on portions of the public trust beaches.”

More than 20 homes are considered to be in danger of falling into the ocean.

“It’s time to start reevaluating and readjusting what our traditional thought processes are with houses being directly on the ocean," said Dare County commissioner Danny Couch.

The prospect of more houses going down is one that is frustrating to many, especially those who were called in to help clean up the debris left behind the last time.

Beachgoers alerted to collapsed house in surf in Rodanthe

"The first house that fell ... in February ... it was polite," recalled Tom Amatucci, Rodanthe-Waves-Salvo Civic Association President. "The Park Service asked who would like to help, [and] we really care about our beach, so we said sure. We came out and we helped ... and then the next two homes fell, and it was like how would you like to participate -- and it’s like wait a minute, we, the locals, seem to be the ones jumping in to help pick up, and there’s just so much debris ... why can’t we take preemptive action?"

“We’re known for our beaches and our main source of income for everybody here is tourism, so you have to keep beaches clean so people will continue to come here," said photographer Daniel Pullen. "In order to do that you can’t have houses falling in every storm.”

Aside from posing a major safety hazard and the massive debris field that was left behind after the last homes fell, there’s another problem that many people aren’t necessarily aware of.

“One of the biggest problems is that these homes all have septic tanks," Flynn explained. "Some have multiple septic tanks because, over the years, as their septic tanks have become compromised, these homes have been allowed to replace their tanks so they can continue to rent or live in these properties. One of the issues that creates is a lot of different septic tanks on the oceanfront that are spewing out wastewater onto the public beach because these drain fields are now on the public ocean front. It’s a tragedy to see families here on vacation and setting up building sand castles in a drain field of wastewater.”