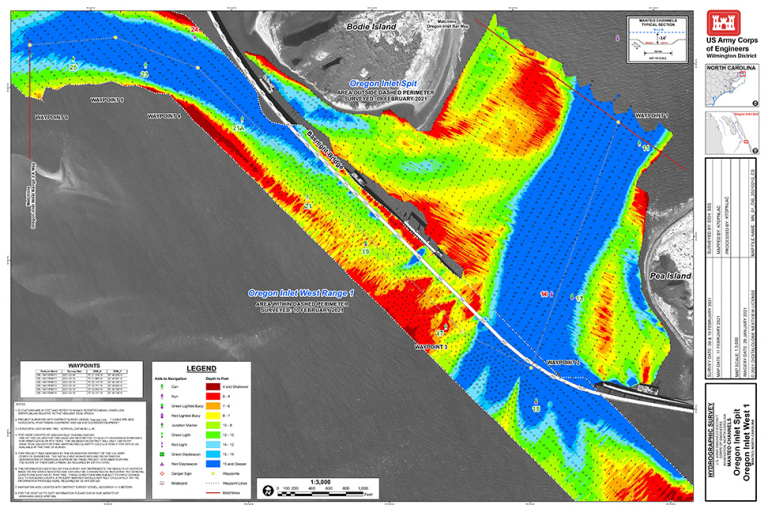 Both Oregon Inlet and Hatteras Inlet are badly shoaled.

At two different meetings, the U.S. Army Corps of Engineers announced its dredging schedule to address the problem at the Dare County inlets. At both the Dare County Waterways Commission and Oregon Inlet Task Force meetings, Joen Petersen represented the Corps.

The sidecaster Merritt arrived in Wanchese Thursday, Feb. 11. The next morning, it worked for an hour on the west side of the Oregon Inlet bridge and then returned to Wanchese. Its job is to cut a pilot channel. Then the hopper dredge Merden will come from Virginia and work west of the bridge for a week, while the Merritt goes to Hatteras Inlet around Feb. 15-17 to cut a channel for the South Ferry Channel. Then, Feb. 22 to 23, the two Corps dredges will flip again.

Petersen said not to hold the operation to the exact dates.

Oregon Inlet dredging is funded by the Corps with an extra $500,000 requested by U.S. Rep. Greg Murphy. Dare County holds the dredging permit for the South Ferry Channel and will pay for that dredging.

About Hatteras Inlet, Dan Oden said watermen were nervous about the inlet. “It closed up in a month.”