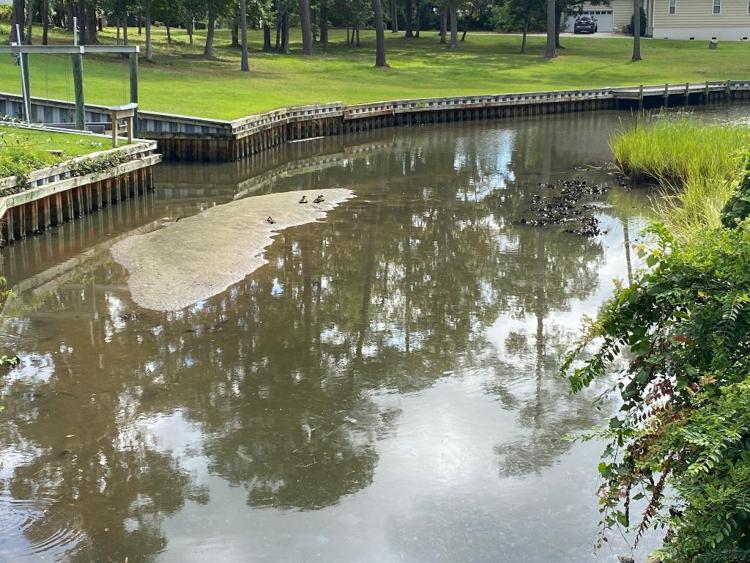 The work would need to be finished in April.

Greg Rudolph, manager of the County Shore Protection Office, which plans and oversees dredging projects, said Tuesday he expects to make a final determination on the configuration of the project in October, go out for bids from contractors in November and award a contract and get underway in December.

The office just did a shellfish survey, which is a crucial factor in whether the county will get the state permit to do the work, Mr. Rudolph said. He’s waiting for those results. Dredging permit applications can be denied by the state if the proposed work is expected to damage significant shellfish resources.

In addition, Mr. Rudolph said he’s waiting for Cape Carteret’s determination of whether it and/or local property owners along Deer Creek will participate financially in the Deer Creek portion of the project. Deer Creek provides water access to Bogue Sound for five neighborhoods in town.

“I know the town has done some outreach to the property owners,” Mr. Rudolph said Tuesday.

The town last month sent a letter to owners along some portions of the creek. It states the Deer Creek potion of the project is estimated to cost $210,000, with two-thirds of that from the state and the remaining one-third, $70,000, split between the county, the town and the 30 property owners, with the goal of dredging to a consistently navigable depth. Each property owner could pay about $550. The overall project is expected to cost close to $1 million, according to Mr. Rudolph.

Some town officials and residents are concerned about including a portion of Deer Creek immediately east of Yaupon Drive in the dredging project. That’s because of a siltation problem that increased when a stormwater management project constructed by the N.C. Coastal Federation in 2016 failed during and after Hurricane Florence’s torrential rains in September 2018. The flooding rains eroded a berm that separated two stretches of engineered wetlands, one at Cape Carteret Baptist Church and the other at the adjacent Cape Carteret Presbyterian Church on Highway 24.