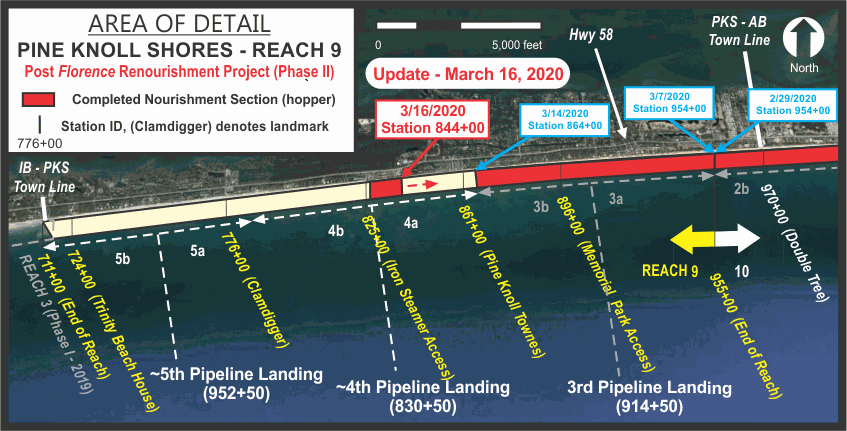 PINE KNOLL SHORES — TheEllis Island, the largest hopper dredge in the United States, is scheduled to join the Bogue Banks beach nourishment project Thursday, and the smaller dredge, the Liberty Island, might stay on the job in an effort to hasten completion.

Greg Rudolph, manager of the Carteret County Shore Protection office in Emerald Isle, said in an email Monday he contacted the corporate office of the contractor, Great Lakes Dredge and Dock Co. of Illinois, to request both vessels work in tandem to compete the project earlier than the Thursday, April 30 deadline. The Liberty Island, under the original plan, is set to move on to a project in Virginia shortly after the Ellis Island arrives.

“Our thinking is this would diminish the COVID-19 risk for Great Lakes (and us) by having all assets here in Carteret County working rather than spread across the Mid-Atlantic, both water and land crews,” Mr. Rudolph wrote.

“Great Lakes could complete our … project in a matter of a few weeks, demobilize, leave safely, invoice us for the sand delivered, and everyone would be happy compared to the alternative, I guess of sitting on pins and needles hoping the Ellis Island can get us to the finish line by (Thursday) April 23 or 30, the regulatory deadline,” he continued.

Mr. Rudolph said, “there a lot of logistics involved that Great Lakes has to evaluate, which they are doing now.”

He said he hopes to get an answer from the company within days.

The Liberty Island has a capacity of about 6,500 cubic yards of sand, while the Ellis Island’s capacity is about 15,000 cubic yards.