Mid-Atlantic
The Department of Transportation describes the Rodanthe “jug handle” bridge as being built on the backside of the island to provide redundant and accessible travel if N.C. 12 is washed out in a storm. Photo: NCDOT 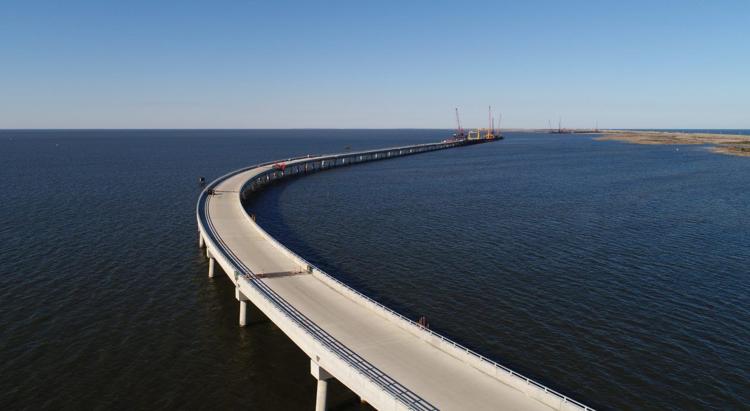 NC - NCDOT designs with resilience in mind for coastal roads

Roadway flooding can happen year-round, but increasingly extreme weather most scientists attribute to climate change has made the vulnerability of coastal roads a clearer and more pressing problem.

Tim Hass, communications officer for the North Carolina Department of Transportation’s Division 1, which covers the northeastern part of the state and the Outer Banks, recently told Coastal Review that there are two types of flooding events along the coast: rainwater flooding and tidal flooding, or overwash.

“For rainwater flooding, picture a kitchen sink that holds 4 gallons of water. If you have a bucket that holds 8 gallons of water and you dump it into the sink all at once, there will be spillage. That’s what happens when we get a large amount of rain in a very short period of time, like some locations experienced earlier in June,” Hass explained earlier this summer.

“Of course, drainage also plays a part in that equation, and NCDOT is always working to make sure that the drainage ditches along the side of state-maintained roads are maintained and unobstructed. That certainly helps, but as in the sink metaphor, if the rain comes fast enough, some flooding will occur, no matter how well the area drains,” he added.

Hass said that overwash happens when storm systems such as hurricanes, tropical storms or nor’easters combine with tidal conditions that push ocean or sound water onto land.

“N.C. 12 experiences that in several places, most notably the ‘S-Curves’ north of Rodanthe and the northern side of Ocracoke Island,” Hass said.

NCDOT is currently building the Rodanthe “Jug Handle” Bridge to bypass the S-curves, which he said should be open by late this year or early next.

The 2.4-mile-long bridge going around the S-curves, which are vulnerable to storm breaches, will connect the southern end of the Pea Island National Wildlife Refuge over the Pamlico Sound to northern Rodanthe.

In 2012, Hurricane Sandy caused severe beach erosion in the area. In March 2013, federal emergency funding was approved for a beach nourishment project that would place 1.6 million cubic yards of sand dredged from two ocean sandbars, work that was completed in fall 2014, according to NCDOT.