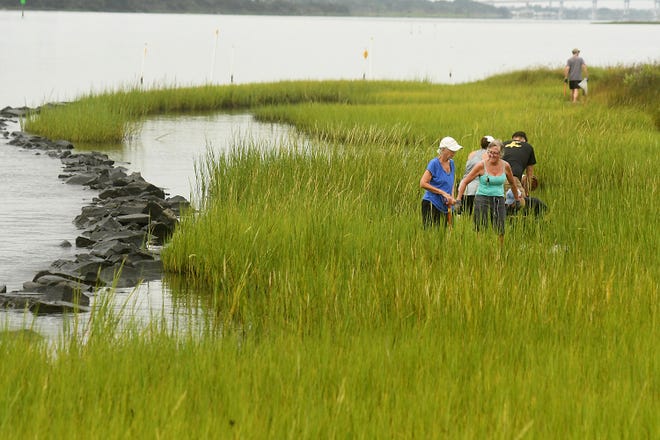 A few miles north of the Surf City high-rise bridge on the mainland side of the Intracoastal Waterway, Richard Moore carefully planted a saltmarsh cordgrass plug in the shallow water just a few feet from the shoreline.

A volunteer from Cisco’s sprawling operation in Research Triangle Park, Moore has worked on building and maintaining several living shorelines along the N.C. coast over the years.

“To see how it’s grown, changed and matured is fantastic,” he said on this muggy late August summer morning, ticking off all of the shellfish and other marine life he’s seen when he's returned to old projects. “It’s really rewarding.”

Nearby, dozens of other volunteers from other groups, including the Marine Corps, planted more marsh grass and picked up trash as the wake from a passing Grady White lapped up against the shore of the N.C. Coastal Federation’s living classroom at Morris Landing.

“These shoreline areas are where the land meets the sea, and they are very dynamic areas,” said Ted Wilgis, a coastal scientist with the federation, as he paused knee-deep in water after planting several cordgrass plugs. “And they're tougher than they look."

Adapting instead of defending

Americans have always been attracted to the sea. Initially, it was for sustenance and trade. But in a trend that has been increasing since World War II as the country became more wealthy and mobile, it has been for recreation and retirement. In Southeastern North Carolina, for example, the population of New Hanover, Brunswick and Pender counties between 1990 and 2020 more than doubled from nearly 201,000 to roughly 422,000, according to the U.S. Census Bureau.

But as people and properties have crowded the coast, waterfront land has become more valuable. And as much of the shoreline has been “hardened” to protect if from erosion and create more “attractive” backyards, those coastal areas have become less flexible in responding to the environmental pressures a changing climate is increasingly placing on them.

Bulkheads, riprap and other armoring of shorelines is today a common site along tidal creeks, estuaries and canals along the Tar Heel State's coastline.

But a new, more flexible approach to shoreline management is gaining converts along the coast — helped in part by the looming challenges climate change promises to bring to coastal areas. Among the supporters are N.C. legislators, who have included $2 million to help promote living shorelines in the proposed state budget bill now working its way through the General Assembly.

This softer approach, which works best in low to moderate wave-energy areas, doesn't attempt to stop the added force brought to bear on coastal shorelines by higher tides and stronger storm surges.

Instead, it tries to adapt with them.