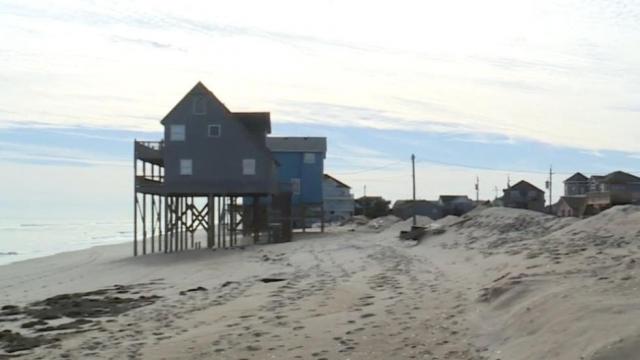 NC - 'It's reaching a crisis point': Outer Banks leaders say they're out of funding to save threatened beach communities

Dare County leaders said communities are at risk from coastal erosion, but state law is holding them back from finding potential solutions.

Dare County leaders said they can no longer afford to build back beaches in the Outer Banks that have been swallowed by the ocean, sending multiple houses collapsing in recent years.

Leaders said communities are now at risk, but state law is holding them back from finding potential solutions.

The Dare County community of Rodanthe caught the world’s attention in May 2022, when two oceanfront homes on the same street collapsedwithin a matter of hours.

Video of one of the crashes went viral – but a year later, not much has improved.

“Our hands are tied because of the money,” Dare County Commissioner Danny Couch told WRAL News. “We don’t have a lot of options, we have an option at this point, and it’s beach nourishment.”

‍Brevard County works on beach restoration after hurricanes cause erosion

As barrier islands, natural erosion causes the Outer Banks to shift and move through the years, placing structures near the Atlantic Ocean in jeopardy over time.

Dare County leaders told WRAL News that according to North Carolina law, the only way they could build up their oceanfront beaches is through beach nourishment, the process of collecting sand from elsewhere and depositing it on the eroded shoreline.

A single-year record of nearly $100 million was spent on beach nourishment in the Outer Banks in 2021, with Dare County paying $30 million for projects at Buxton and Avon.

But this week, the county held a meeting to explain why beach nourishment isn’t happening in Rodanthe.

“The county doesn’t have the funds to pay for a beach nourishment project,” Dare County Manager Bobby Outten said. “We don’t have $30 million to do that, and without an influx of new money, we aren’t going to be in a position to nourish in Rodanthe.”

Outten said the county typically pays for beach nourishment through a fund supplied by their occupancy tax. The fund generated nearly $15 million during both fiscal year 2021 and 2022 due to an explosion in the county’s growth rate tied to the pandemic, but Outten said it typically only takes in under $400,000 annually.