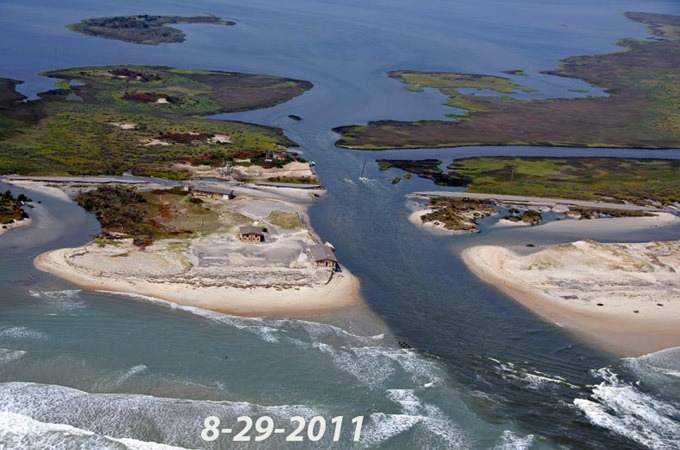 Every generation or so, the Outer Banks experiences a major storm that changes the landscape. These changes include alterations to the literal geography of the islands, for sure, but they also entail shifts in our perspectives, and in how the local community responds to storms going forward.

Hurricane Irene made landfall on Saturday morning, August 27, at about 7:30 a.m. near Cape Lookout. Having diminished in strength from a Category 3 to a Category 1, there was widespread hope that the storm would leave behind minimal damage, like 2010’s Hurricane Earl, which had a similar path. But as Irene passed over the barrier islands and turned north, heading up the Pamlico Sound, it became clear that this would not be the case.

Southern Hatteras Island and Ocracoke Island remained relatively unscathed, but in the northern villages of Avon, Rodanthe, Waves, and Salvo, (and some areas of northern Dare County), the surge was catastrophic, with up to 10-12 feet of water, per National Weather Service records.

Irene cut two distinct inlets along Pea Island, created multiple dune breaches, and resulted in unprecedented soundside flooding to homes and structures in Avon and the Tri-villages. Power was tenuous for more than a week, evacuated residents weren’t able to come home for about 10 days, and N.C. Highway 12 was closed from August 27 until October 10, meaning that residents had to utilize the two-hour-long emergency ferry from Rodanthe to Stumpy Point to exit the island for seven weeks.