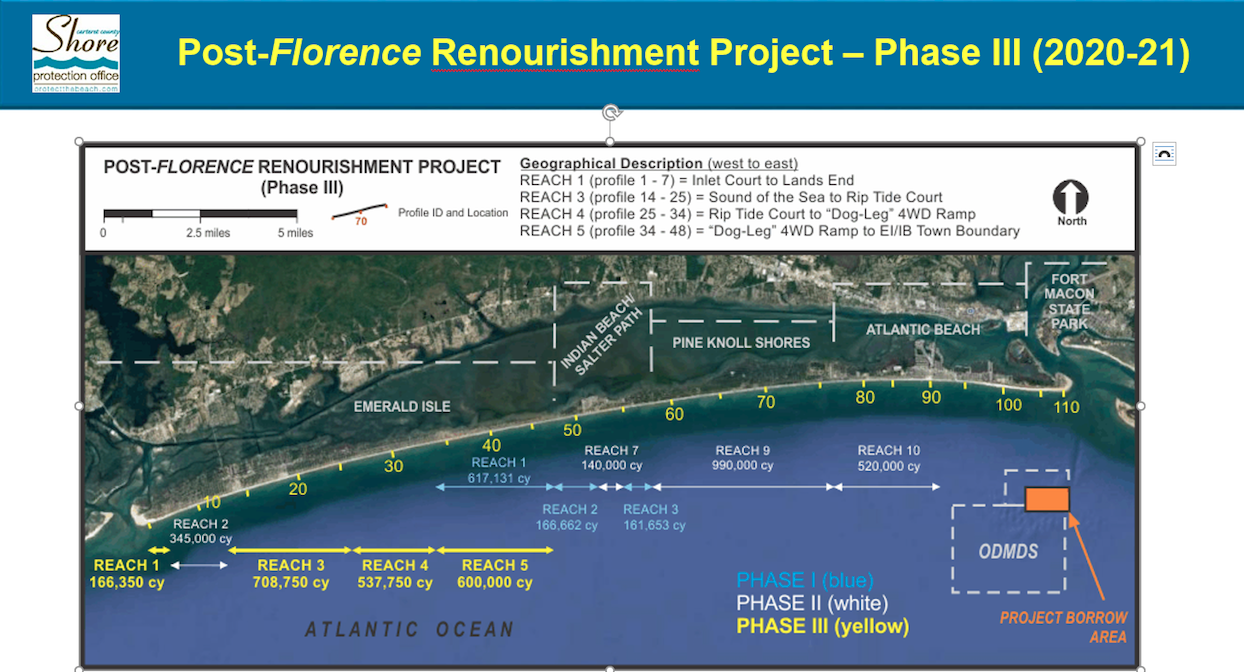 NC - Emerald Isle gets briefed on next beach nourishment project

Mr. Rudolph, speaking during the commission’s monthly meeting conducted in town hall and aired live on Facebook for the public, said the project in central Emerald Isle, extreme western Emerald Isle and perhaps a portion of eastern Emerald Isle is tentatively planned for late 2020 or early 2021.

It would be a follow-up to two previous Bogue Banks nourishment projects. In 2019, phase one nourished beaches in eastern Emerald Isle, Indian Beach and most of Salter Path at a cost of $20.2 million, with money coming from the county nourishment fund and the towns. Phase two, completed last month, covered western Atlantic Beach, all of Pine Knoll Shores, a small portion of Salter Path and part of western Emerald Isle at a cost of $28.2 million, with about $15 million from the state and about $13 million from the county’s beach nourishment fund, which receives half the proceeds from the county’s tourist-driven occupancy tax.

Phase three would cover about the same linear footage as phase two, 9.5 miles. But much of phase two was in Atlantic Beach and Pine Knoll Shores, so the cost of transporting the sand by dredge boat from the dredge site off Atlantic Beach was lower than it will be for phase three.

In an interview Wednesday, after the Emerald Isle meeting, Mr. Rudolph said there’s no way to know how much a successful bid for the project will be, but the county has chosen $45 million as the upper estimate.

He said in the interview – and in the presentation to town commissioners – Emerald Isle won’t have to pay anything out of its own budget for the work because it’s basically money FEMA has reimbursed the town for sand lost during Hurricane Florence in September 2018.