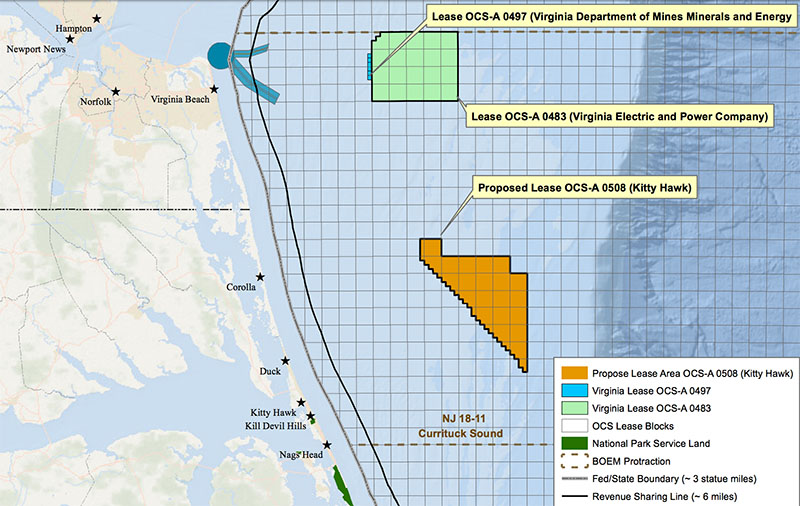 Three federal leases have been granted for large-scale ocean wind farms off the coast of North Carolina, with two more potential sites now the subject of a monthlong public comment period.

Such waves of offshore wind projects, with the combined potential to ultimately power the equivalent of nearly 3 million typical homes, could fuel a clean-energy surge that accelerates North Carolina toward its mandated emissions reductions aimed at curbing climate change.

However, just how much of that power will serve electric customers in the state — or how many of the projects eventually come online — is impossible to predict.

Only one of the proposed ocean arrays, in waters to be leased by an unregulated subsidiary of Duke Energy, is almost certain to come ashore in North Carolina.

Duke Energy Renewables Wind was awarded a $155 million wind-energy lease in May for 55,000 Atlantic acres about 20 miles off the coast of Bald Head Island and near the South Carolina line. Duke estimates its array will have a capacity of 1,600 megawatts, enough to power nearly 375,000 homes.

A U.S. subsidiary of Paris-based company TotalEnergies also submitted a winning bid of $160 million for a similarly sized area adjacent to Duke’s where it expects to have the capability to produce 1,000 megawatts.

Up the coast, a Connecticut company has a five-year head start on Duke and TotalEnergies with what has been dubbed the Kitty Hawk project off the Outer Banks.

Orange, Conn.-based Avangrid Renewables outbid three other companies for wind-power lease rights to 122,000 acres in 2017. The company hopes to have all state and federal permits for the project by 2025 and begin construction in 2026.

While Kitty Hawk is expected to be capable of serving the equivalent of 700,000 homes, few of them will be in North Carolina.

Power generated by the operation will come ashore in Norfolk, Va., and be distributed by PJM Interconnection, a regional transmission organization that sells electricity in all or parts of 13 states and the District of Columbia. Just a small section in the northeast corner of North Carolina is included in PJM’s territory.

The two North Carolina areas, covering close to 250 acres, are east of the northern Outer Banks, near the Virginia border.

The targeted site closest to the coast covers nearly 210,000 acres and is 25 miles from shore. A smaller, 42,000-acre prospective project area is 72 miles out and in considerably deeper waters.

If lease proceedings for the two newly identified sites go through, the winning bidders will have choices to make.

“Given the proximity to PJM territory and Virginia, there’s a real possibility that this power could be delivered into that market versus into Duke Energy territory,” said Matt Abele, director of marketing and communications at the N.C. Sustainable Energy Association.

Duke, North Carolina’s largest utility, will likely have outsized influence over potential wind projects off the state’s coast and the potential route of the power they produce.