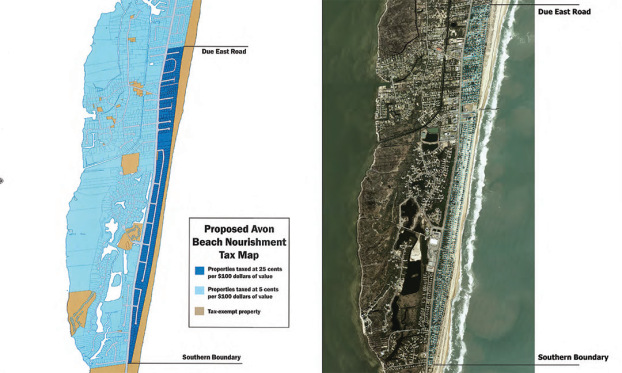 Dare County will proceed with the requirements to set up special tax districts for beach nourishment in Avon. In the current proposal, Avon commercial and residential property owners would pay 30% and Dare County 70% of the cost for an $11.3 million project.

The current proposal calls one district for properties to the east of NC 12 from Due East Road to the southern boundary of Avon. That district could have a rate of 25 cents per $100 valuation. The second district would encompass all properties to the west of NC 12 plus properties from Due East to the northern boundary of Avon. This district would be charged 10 cents per $100 valuation. Dare County introduced its live, online public comment for the March 15 session. Four people spoke, but six other names were called. One person sent an email.

In explaining Monday night’s action, Outten said the legal process to set up the districts will take 60 days. The commissioners will have two steps to approval: actually setting up the districts and then establishing the tax rate as part of the budget process.

Corey Bonner wants a more effective solution. He charged that no collaboration exists with the state and federal government.

Mary Ann Marsal, who lives five lots back from the ocean, stated the districts are “arbitrary and unfair.” She has no problem with flooding. She advocated for one district.