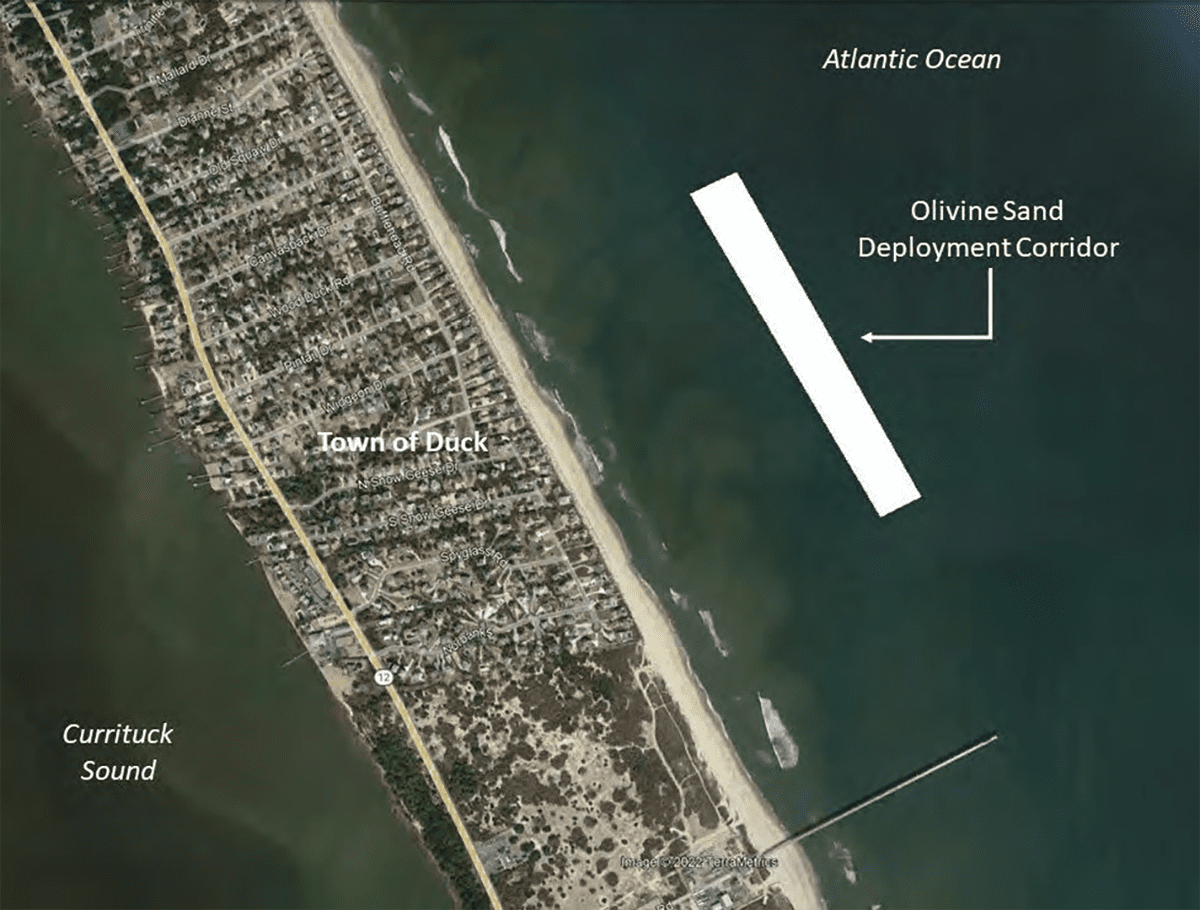 DUCK — It was flashback to high school chemistry class for some, but Duck residents were up to the challenge last week at an information session about a carbon capture demonstration project proposed off their beach.

Vesta North Carolina is seeking a permit to place about 20,000 cubic yards of ground olivine in the nearshore waters 1,500 feet from the shoreline of this northern Outer Banks town.

The intention is to study on a small scale the ability of the material to mitigate the impacts of climate change. But residents wondered about unknown risks inherent in a test project, and if their resort community might be stuck with the consequences if it went awry.

Other projects the company has conducted using olivine are in Massachusetts and New York, although neither has been done in the open ocean.

“There’s 330 miles approximately of shoreline in North Carolina and there’s over 120 miles of them that have no population on them,” one Duck resident commented. “Why does it have to go here?”

One big reason is the town’s resident coastal science behemoth, the Army Engineer Research and Development Center’s Field Research Facility. That’s what Grace Andrews, Vesta’s head of science, told a full room of attendees at the Nov. 17 meeting. Informally known as the Duck Pier, the 45-year-old oceanfront site is renowned worldwide for decades of innovative research and volumes of data on coastal processes.

The Corps’ Engineering with Nature, or EWN, program is partially funding the Vesta project, and scientists at the pier are collaborating on the project with Vesta.

“You have one of the best-studied beaches of anywhere in the United States,” Andrews said. “The sheer knowledge here makes this location invaluable in terms of ensuring that we can do world-class, rigorous science. It’s unparalleled, and it’s frankly unequaled anywhere else.”

Olivine, named for its green hue, is a magnesium silicate mineral that is similar to quartz, the main ingredient of the sand on Outer Banks beaches. But it has an important difference: Olivine can capture carbon dioxide, the main greenhouse gas blamed for global warming.

“It is an incredibly common mineral,” Andrews said. An inert rock, olivine can be found all over the world, including in large quantities in western North Carolina, and it can be mined and milled to specific grain size. But the only active mining currently in the U.S. is on the West Coast. “Why do we care about all this? It’s because it has a special property that removes carbon dioxide from the atmosphere when it comes into contact with the water.”

Andrews, who has a doctorate in Earth science from Northwestern University, explained that olivine’s unique quality is part of a natural process known as mineral weathering that happens whenever water meets rock. But not all minerals remove carbon, she said, as olivine does.