Mid-Atlantic
Since a 2005 project to relocate Bogue Inlet channel and slow erosion at The Point in Emerald Isle, the beach has accreted and new dunes have formed. Carteret County officials expected the relocation project to have a 15-year life, but it now appears it might get closer to 30 years. (Brad Rich photo) 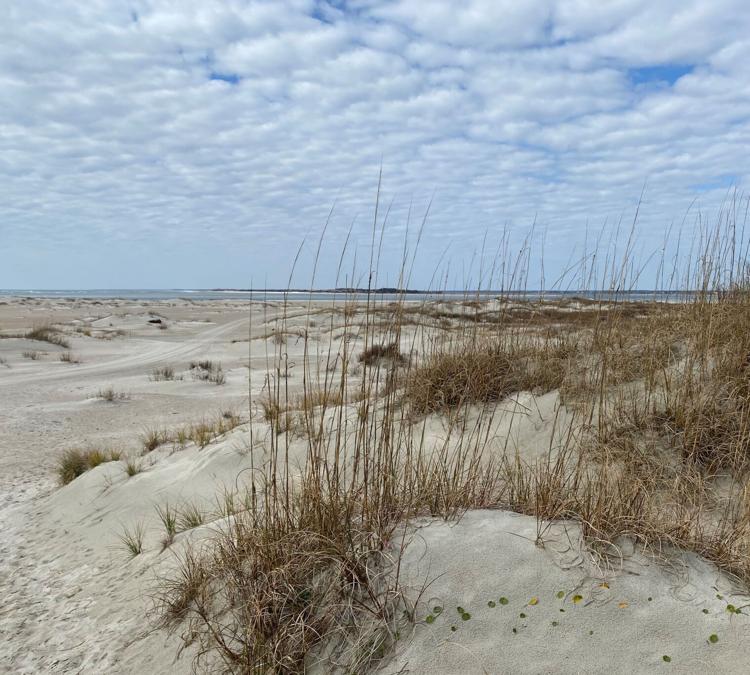 EMERALD ISLE — In 2005, when Emerald Isle and the state of North Carolina paid $11.4 million to relocate Bogue Inlet channel farther from the rapidly eroding western tip of Bogue Banks, experts thought they might need repeat the process in 15 years.

“It’s a real success story,” Mr. Rudolph said Monday, speaking during the monthly meeting of the County Beach Commission. “We think we have about 12 years to go if (the channel) keeps moving at the same pace.

“From a navigation standpoint … there are a few hotspots,” Mr. Rudolph added, but those can be cleaned up with a maintenance dredging project scheduled this fall.

Carteret and Onslow counties and the towns of Cape Carteret, Emerald Isle, Swansboro and Cedar Point have chipped in a total of $100,000 for the project, and the state will kick in $200,000 from its Shallow Draft Navigation Channel Dredging and Aquatic Weed Fund, which gets revenue from the marine fuel tax and boat titles and transfers.

Mr. Rudolph recalls 2005 quite well, as he stood precariously on sandbags at The Point, looking at the churning surf threatening houses while he took photos.

Tom Jarrett, who led the planning for the project as an engineer for Coastal Planning and Engineering, agreed.

“We did get a little lucky,” he said during the meeting Monday. “We had a few little glitches early on, but (the channel) settled down after six or eight months and behaved like it should have.”

Mr. Rudolph said currently the channel is migrating east, toward The Point, at about 20 feet per year. That’s still about 663 feet west of the eastern side of a “safe box” all involved are using to predict when a relocation will be necessary.