Mid-Atlantic
This section of eastern Emerald Isle, shown here during a beach nourishment project in 2019, is part of what Carteret County considers an erosion hotspot on Bogue Banks. via Town of Emerald Isle 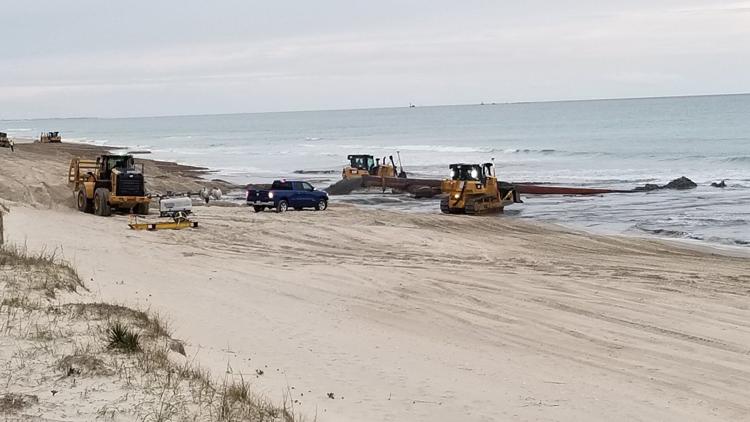 PINE KNOLL SHORES — The Carteret County Beach Commission will receive its annual “State of the Beach” report from its beach engineering firm Monday when it meets at 2 p.m. in the Pine Knoll Shores Town Hall and on Zoom.

The presentation by representatives from Moffatt & Nichol, the county’s beach engineering firm, will be detailed, but Greg Rudolph, manager of the County Shore Protection Office, outlined a few highlights in an email this week.

For example, he said, according to the engineers’ recent survey, Bogue Banks gained sand in the past year, even without considering the 2 million cubic yards placed on the beaches during the nourishment project completed in the spring.

The beaches lost millions of cubic yards of sand during and after Hurricane Florence in September 2018, Mr. Rudolph said, but it didn’t go very far, just downslope in the ocean.

“Well some of that sand in the past year has moved upslope above -12 feet sea level,” he said, putting it closer to the recreational beach. At that level, Mr. Rudolph said, it counts “as a gain” and a fairly sizeable one, possibly as much as a million cubic yards.

As a result, he said, “All of our reaches gained sand this past year regardless if they received nourishment or not, with two notable but not surprising exceptions, Emerald Isle East and Fort Macon (State Park), which is close to (Beaufort Inlet) and hasn’t been nourished in some time.”

“Reaches” are uniformly sized stretches, or transects, of beach the county uses to plan and execute nourishment projects and measure erosion and accretion. Emerald Isle East is roughly from the town line with Indian Beach through Emerald Isle’s numbered streets to the vehicle access ramp on Ocean Drive. Fort Macon beaches are expected to get nourished this winter as part of the periodic federal project to dredge and dispose of sand from the harbor at the State Port of Morehead City. Eastern Emerald is Bogue Banks’ erosion hotspot and is scheduled get sand this winter in a $32 million county-sponsored project.