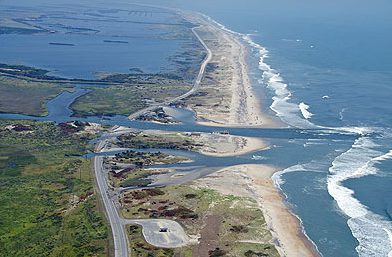 “Earlier this month, 3,700 letters were sent to property owners in Avon to share the county’s proposed plans for beach nourishment,” stated Dare County Board of Commissioners Chairman, Bob Woodard, at the start of the meeting.  “We have received 276 emails from people regarding this issue, and [there are] 45 people who have signed up to ask questions or give comments during this meeting.”

The meeting began with a brief history of beach nourishment in Dare County provided by Outten. The first beach nourishment project was proposed in the late 1980s in the town of Nags Head, with the cost of the project split 70-20-10 between the federal, state, and county governments. “This led to the establishment of the occupancy tax,” said Outten. “The federal share never came through, and state funds fell through as a result.” A decision was eventually made for Nags Head to pay for 50% of the project costs, and for Dare County to pay for the other 50%. The ensuing beach nourishment project wrapped up in 2011, just days before Hurricane Irene hit.

“When we got [to Nags Head] after Irene, to our surprise and delight, there was no damage… and we all sighed a big sigh of relief,” said Outten.

But Hatteras Island was a different story after Irene. N.C. Highway 12 was destroyed north of Rodanthe, and residents had to utilize an emergency ferry for roughly 30 days to gain access to the island. Outten noted that when the 2017/2018 Buxton Beach Nourishment project was first floated, it was out of fear that similar and substantial damage could occur to this southern stretch of N.C. Highway 12 as well. “We were concerned that Buxton was going to be a Rodanthe [after Irene]… Our goal was to prevent the loss of Highway 12 as it had occurred in Rodanthe.”