Mid-Atlantic
Waves break around an exposed septic tank with no visible drain field at a rental house on the public beach in Rodanthe. Photo: National Park Service via Dare County Planning Department. 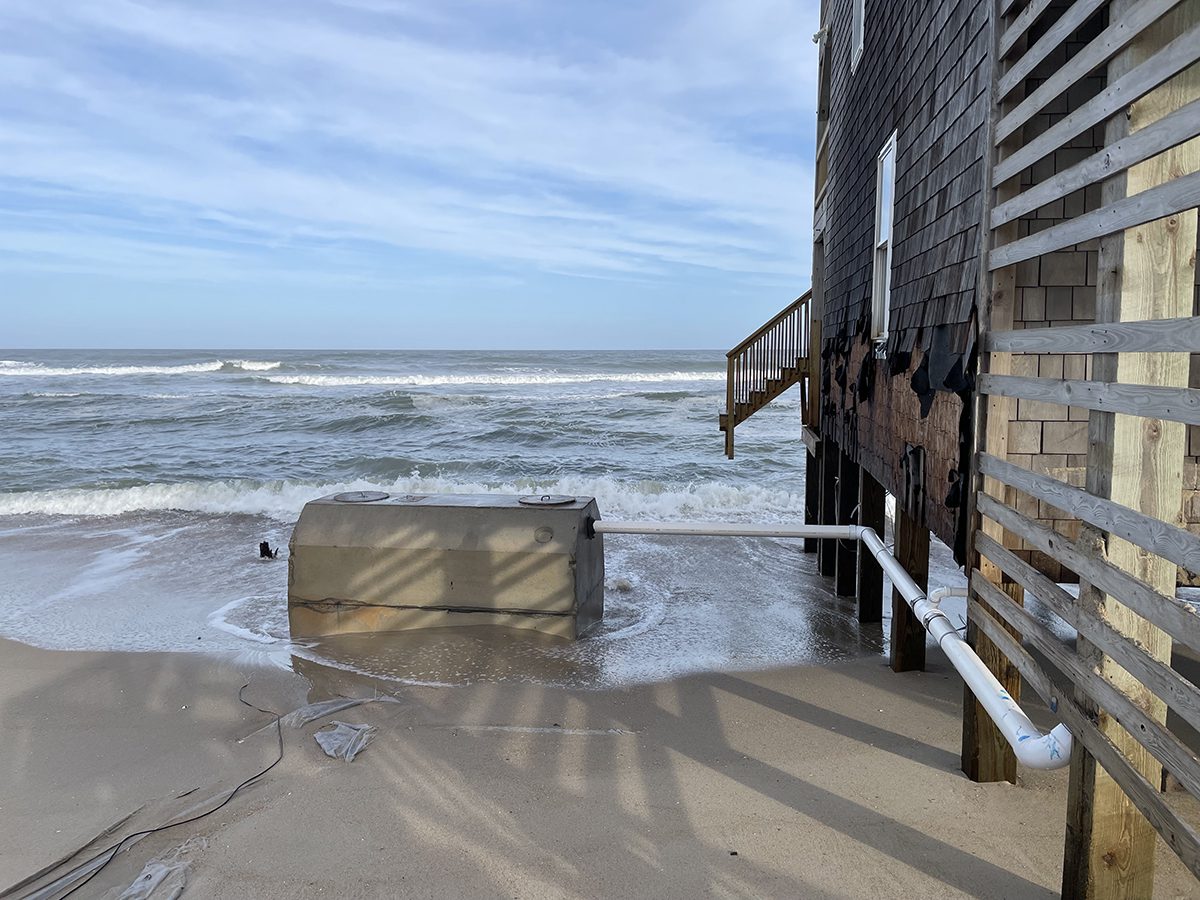 RODANTHE — Nothing good can be said about septic tanks leaking their foul contents onto a public beach. It sounds even worse that it’s within a national seashore on the Outer Banks renowned for its beautiful, clean beaches.

That unfortunate reality illustrates the challenge adapting to rising seas under outmoded policies and a bureaucracy paralyzed by competing interests.

“We have observed septic seeping out as recently as Saturday,” Dave Hallac, superintendent of Cape Hatteras National Seashore, said Thursday.

In the wake of several houses this year falling into the sea, Hallac said that about two-dozen houses in Rodanthe remain exposed to the ocean, where much of beachfront has lost the protective dune.

The national seashore’s physical scientist Michael Flynn said that the National Park Service was notified Oct. 29 about a strong odor of sewage on Ocean Drive in Rodanthe, where a number of houses, some with exposed and damaged septic tanks, are standing on the beach just yards from the swirling Atlantic. Earlier this year, three large houses on the same road collapsed into the ocean, littering miles of shoreline.

When Flynn inspected the area Sunday, he found that the whole drain field for one septic tank was washed out, he said, and another appeared to have an unsealed pipe that led to its drain field.

“It was two hours before low tide,” Flynn said. “You could see the high tide line. (The surf) was probably washing over the pipe.”

Rodanthe, one of seven village communities on Hatteras Island, has one of the highest rates of beach erosion on the Outer Banks. At Mirlo Beach, at the north end of Rodanthe, the average annual erosion rate has been as high as 14 feet.

According to Flynn, between 1998 and 2022, the average annual rate of erosion on Ocean Drive has ranged from 9 to 12 feet. In Buxton, another highly eroding shoreline that was recently renourished, he said that the erosion rate over that same period averaged about 6.8 feet a year.

The issue was reported to the Dare County Planning Department and the county Department of Environmental Health, which administers septic permits for the state.

According to information provided in an email Thursday from the county health department, a total of 24 septic systems had been compromised by storm damage at 15 different oceanfront properties this year. Nine septic repair permits were issued for Rodanthe properties, and remaining property owners may not have applied for a permit, or are waiting for new surveys to be completed.