Coastwide
“This plot shows yearly temperature anomalies from 1880 to 2019, with respect to the 1951-1980 mean, as recorded by NASA, NOAA, the Berkeley Earth research group, the Met Office Hadley Centre (UK), and the Cowtan and Way analysis. Though there are minor variations from year to year, all five temperature records show peaks and valleys in sync with each other. All show rapid warming in the past few decades, and all show the past decade has been the warmest.” Credits: NASA GISS/Gavin Schmidt 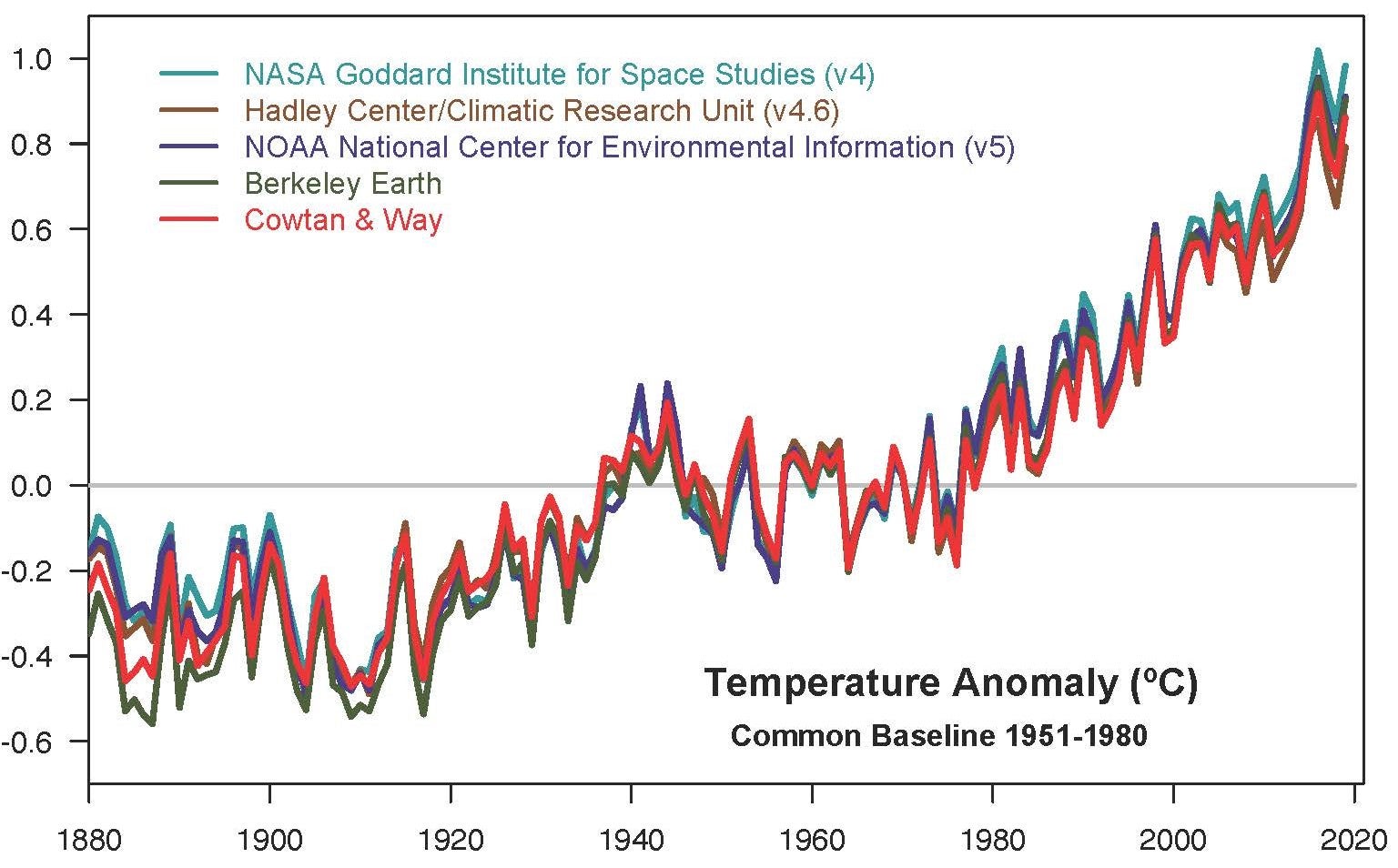 NASA and the NOAA have both found that the last decade was the hottest ever recorded. New data from the National Oceanic and Atmospheric Administration (NOAA) shows that the global annual temperature has increased at an average rate of 0.07 degrees Celcius per decade since 1880 and over twice that since 1981. What this means is obvious: our planet is getting hotter despite what deniers want to believe.

According to the Gavin Schmidt, the director of the NASA Goddard Institute for Space Studies, every decade since the 1960s has been warmer than the previous decade, and not by a small amount. The NOAA has a graph of the 10 hottest years from 1880 through 2019 and all 10 are in my own lifetime. The hottest year was 2016, followed by 2019.

Ocean temperates in 2019 were also at the highest ever recorded, and this makes the ocean acidic while also bringing sea levels higher and causing extreme weather. A study in the journal Advances in Atmospheric Sciences found record-high ocean temperates in 2019 and proof that our oceans are warming at a fast pace. One of the authors of the study, John Abraham, who is a professor of thermal sciences at the University of St. Thomas in Minnesota, says that, “The pace of warming has increased about 500% since the late 1980s.” He adds that, “Unless we do something significant and quickly, it’s really dire news.”

“The amount of heat we have put in the world’s oceans in the past 25 years equals to 3.6 billion Hiroshima atom bomb explosions.” —Lijing Cheng,  Associate Professor at Institute of Atmospheric Physics in Beijing

“A map of the world noting some of the most significant weather climate events of 2019.” For more info, see this story: http://bit.ly/Global201912.

Warmer oceans also put coastal communities around the globe at risk by expanding and melting ice, which raises sea levels. In Louisiana, the sea level around the coast is up to 24 inches higher than it was in 1950. New Orleans is experiencing one of the highest rates of sea-level rise in the world, and Louisiana is already losing around 25 square miles of land per decade due to the rise in the sea levels. The sea level around Grand Isle has also risen by 24 inches since 1950. In 2016, Isle de Jean Charles made the news due to having lost 98% of its land, becoming Louisiana’s vanishing island. Natives of the Biloxi-Chitimacha-Choctaw tribe were living on the island and were awarded a $52 million resettlement fund from the Department of Housing and Urban Development as a part of it’s Natural Disaster Resiliency Competition to help fund housing for around 400 tribe members who were living on the now sunken island. This was a few years ago.