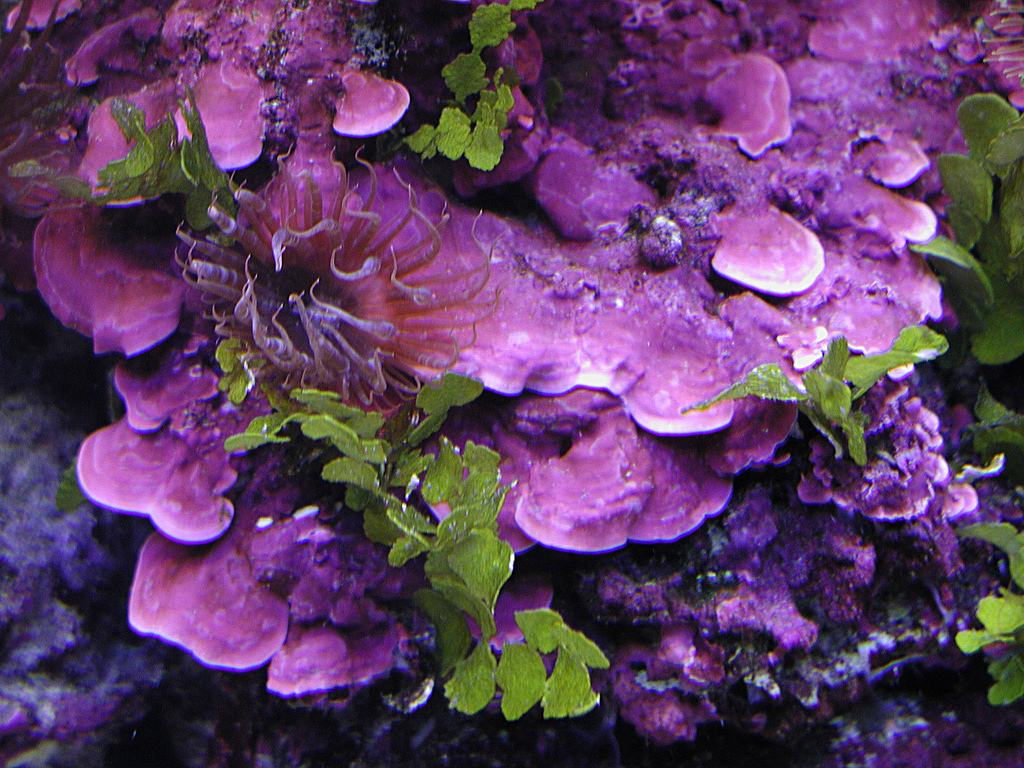 Coralline red algae (CRA) are important ecosystem engineers in the world’s oceans. They play key roles as primary food source and carbonate producers in marine habitats. CRA are also vital for modern reef systems where they act as substrate for coral growth and stabilizers of reef frameworks. However, morphotaxonomic identification of these important marine organisms is hampered by the fact that morphological concepts used for their classification do not correspond to molecular data. We present the first analysis of nanoscale features in calcified cell walls of CRA in a globally distributed sample set. We use new morphological traits based on these cell wall ultrastructures to construct an independent morphological phyletic tree that shows a promising congruency with existing CRA molecular phylogenies. Our results highlight cellular ultrastructures as a tool to define the phenotypic expression of genotypic information showing their potential to unify morphology with molecular phylogeny.

Biomineralization, in its strictest sense (1, 2), follows similar basic principles in all organisms. In general, the mineralized skeleton produced by this process is highly ordered (2–5) and forms the basis for a branch of morphotaxonomy, which is applied in modern but, especially, fossil taxonomy. Skeletal mineralization occurs in biologically controlled microenvironments producing mineral precipitation along an organic matrix (1, 2, 6). Specifics of these organic-mineral interactions are still poorly understood, with only recent methodological advancements providing much needed insights (7). Despite these issues, studies of several organism groups have shown that the morphology—but not necessarily the chemistry—of skeletal ultrastructures is strictly biologically controlled and thus not easily perturbed by environmental conditions such as changing pH levels in the ocean (7–12). Consequently, the effect and interplay of environmental and climatological changes on these mineral precipitates are of increasing interest not only in the face of modern climate change but also in the geological past (9, 10, 12, 13).

In microscopic organisms such as foraminifera (5, 14) and coccolithophores (15), the use of these microstructures and ultrastructures has a long and successful history of producing reliable morphotaxonomies that show a high degree of overlap with molecular phylogeny down to the (sub-)species level (3, 5, 14, 15). In particular, the definition of previously unidentified ultrastructural morphologic features in the outer layer (extrados) of miliolid benthic foraminiferal tests provided morphological criteria that are relevant on a generic to suprageneric level and are independent of the ontogenetic development (16).

Yet, despite these historically successful applications, micro- and ultrastructure-based morphotaxonomy is still in its infancy for most macroscopic organism groups. In this context, coral microscale morphology, in particular, has recently received much attention (4, 8, 17, 18). Detailed morphological description of scleractinian corals defined morphologic criteria that are in close congruence with molecular data (19) and have been tested for several clades [e.g., Mussidae (20), Lobophylliidae (21), and the Merulinidae, Montastraeidae, and Diploastraeidae (22)]. Combined with molecular phylogeny, such studies heralded the revision of scleractinian coral taxonomy on every phylogenetic level (8, 17–20). These recent advances have had a great impact on our understanding of both biogeographic and evolutionary aspects of global scleractinian coral distribution (17, 20, 21, 23, 24).