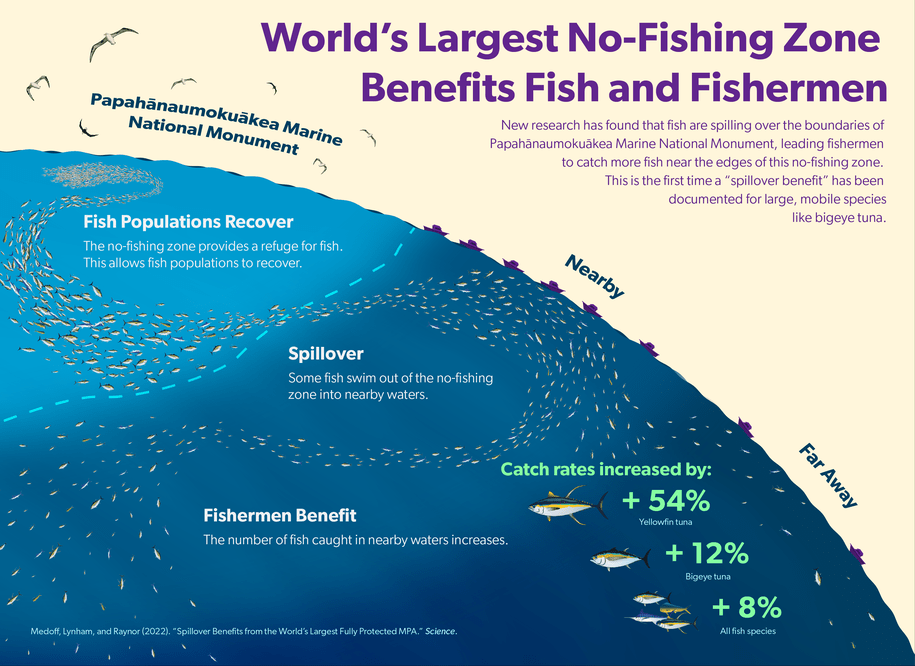 The no fishing zone at Papahānaumokuākea Marine National Monument around the northwestern Hawaiian islands has resulted in the recovery of marine life including large tunas. Tuna numbers have increased in the unprotected main Hawaiian islands as spillover from the protected area. I wrote that this would happen about twenty years ago.

Never think for a minute that what you say or do won’t make a difference. Large international meetings such as COP27 can lead to feelings of disempowerment and futility, but as Greta Thunberg showed one individual can spark a movement that inspires a generation. Even something as small as an online comment submitted to the federal government can make a difference.

About twenty years ago a coalition of native Hawaiians, environmental activists, government scientists and political leaders began working on a proposal to create a marine sanctuary and no fishing zone around the remote northwestern Hawaiian islands. Once some of these islands were inhabited by native Hawaiians who left significant cultural artifacts. These islands, including Midway island, had military importance in WWII but were too small and too far away from the highly populated main islands to be able to maintain an economically viable human population. On the other hand they are critical habitat for birds and marine life.  There was an opportunity to create a sanctuary and restore the habitat but a few large commercial fishing operations were still profiting from taking the most commercially valuable marine species. They had political connections on the islands. A key to the political success of the proposed sanctuary would be to win over the large community of people involved in amateur and small local commercial fishing on the main islands.

NOAA had an online page soliciting public comments.  I wrote up a comment. (I think it was an earlier solicitation than the one I just linked to.)  I thought that was the last I would ever see of it.

One day down at the beach months later I was talking to one of my body surfing buddies Eldon. Eldon wasn’t just an excellent body surfer. He was an outstanding fisherman who made, in the Japanese-Hawaiian tradition, the best poke, by far, that I have ever eaten. Eldon, said to me, “I saw what you wrote in the Hawaii Fishing News.“ I had no idea what he was talking about. “I didn’t write anything for the Hawaii Fishing News”, I replied. But I had. They had picked up and published my comment to NOAA about the proposed marine sanctuary in the Hawaii Fishing news. I haven’t seen that comment since I saw it so many years ago in the Hawaii Fishing News, but I know what the crux of the comment was. We needed to establish a marine protected area with a no fishing zone in the northwestern Hawaiian Islands to be a marine sanctuary for the Pacific and the world. If we did it would serve as a nursery and place of refuge for marine life and bird life and populations would recover. Over time, the vibrant fish stocks would expand back into the main Hawaiian islands.

What I wrote caught on with the fishing community in Hawaii. It was consistent with traditional Hawaiian beliefs about conservation and it made sense. The fishing community supported the proposed marine sanctuary. NOAA worked hand in hand with Hawaiian cultural practitioners to win their support. Democrats and Republicans bought into establishing a marine national monument. A key part of wining that bipartisan support was the benefit to people on the main islands.

Now, let’s be clear. Many people worked very hard for many years to make the Papahānaumokuākea marine monument what is is today. My personal role was tiny. I wrote a few words that helped.

What has brought me tears of joy is seeing the success of the monument. I never, in my wildest dreams, thought that the recovery of the ecosystem in the northwestern islands would happen so quickly that I would read scientific reports that the stocks of large fish, especially tuna, would be observed increasing on the main Hawaiian islands in my lifetime. This is a stunning success story.