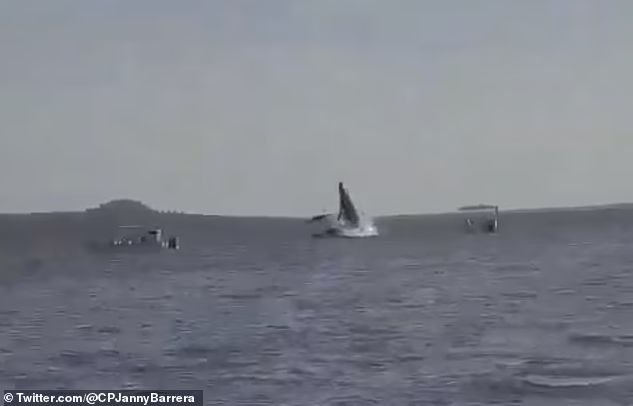 MX - Whale leaps and lands on top of boat in Gulf of California in Mexico, injuring two passengers

A giant whale nearly destroyed a small yacht in the Gulf of California when it crashed on top of it Saturday in Sinaloa, Mexico. Two of the four passengers on board suffered non-life threatening injuries, including rib and leg fractures. The accident took place in a region which is a popular destination for whale watchers at this time of the year

This is the tense moment a popular whale nearly killed four boat passengers when it leaped out from the water and almost crushed their yacht in northern Mexico.

Footage captured by bystander showed the small boat sailing through the Gulf of California when the mammal, known to Sinaloa local authorities as 'Pechocho' came splashing down over it on Saturday.

The impact of the crashing whale flipped the boat over and tossed the passengers into the bay, located off the coast of the Sinaloa municipality of Topolobampo.

Ahome Civil Protection coordinator, Omar Mendoza, said the yacht's presence in the bay, that is heavily populated with whales at this time of the year, may have provoked the incident.