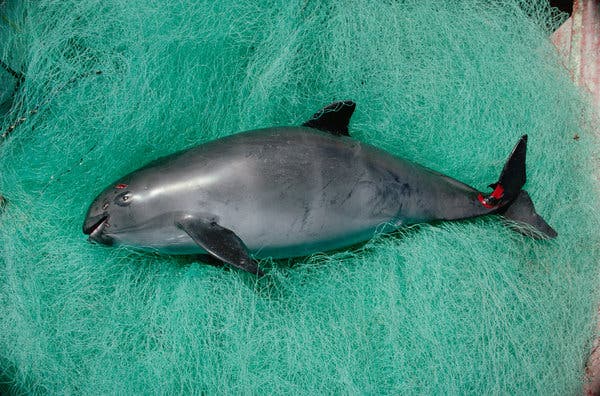 The U.S. National Marine Fisheries Service (NMFS) has expanded its ban on imports of shrimp and other seafood caught in the habitat of the critically endangered vaquita porpoise, which lives in Mexican waters in the northern Gulf of California.

t is estimated that just 10 vaquita remain alive on earth, down from an estimated 19 individuals in August 2019, and from around 560 animals in the 1990s. The population has been decimated by entanglements in gillnets set to catch shrimp and totoaba, another endangered species.

The U.S. Marine Mammal Protection Act mandates the U.S. government act to prohibit importation of seafood caught using fishing gear that kills marine mammals in excess of United States standards, Natural Resources Defense Council (NRDC) Senior Attorney Zak Smith said in a press release. The import ban is placing “enormous pressure on the Mexican government to stop the use of deadly gillnets that are entangling, drowning, and killing the vaquita porpoise,” he said.

“This is exactly how the law protecting marine mammals is supposed to work: if Mexico’s fisheries kill vaquita at a rate that violates U.S. standards, the U.S. must ban imports," Smith said. “Mexico has no choice but to eliminate the destructive fishing taking place in the northern Gulf of California that is driving the vaquita to extinction. It’s the only hope the vaquita has for survival, and it is required if Mexico wants to resume exporting these products to the United States.”

Sarah Uhlemann, international program director at the Center for Biological Diversity, which along with the Natural Resources Defense Council and the Animal Welfare Institute have fought a long-running legal battle to implement the ban, over the objections of the administration of U.S. President Donald Trump, said scientists have warned that the vaquita will go extinct soon unless Mexico “fully and permanently bans all gillnets in the animal’s habitat and massively steps up enforcement.”

“This embargo is a crucial step toward ending the Mexican government’s utter indifference to the vaquita’s extinction,” Uhlemann said. “Since [Mexican] President Lopez Obrador took office, his administration has sat by and watched these tiny porpoises spiral toward oblivion. But money matters, and this embargo should finally get Mexico’s attention.”

In 2018, the U.S. Court of International Trade ordered the Trump administration to ban shrimp, chano, sierra, and corvina seafood imports from Mexico caught with gillnets in the vaquita’s habitat, per the  rules of the Marine Mammal Protection Act. The 4 March NMFS announcement expands that embargo to include almost all seafood caught in Mexico’s northern Gulf of California, including trawl-caught shrimp; all corvina, sierra, and sardines caught via purse-seine net; sierra caught with hook-and-line; and almost any seafood caught with a gillnet, including anchovy, herrings, sardines, mackerels, croaker, and pilchard, according to the Center for Biological Diversity.