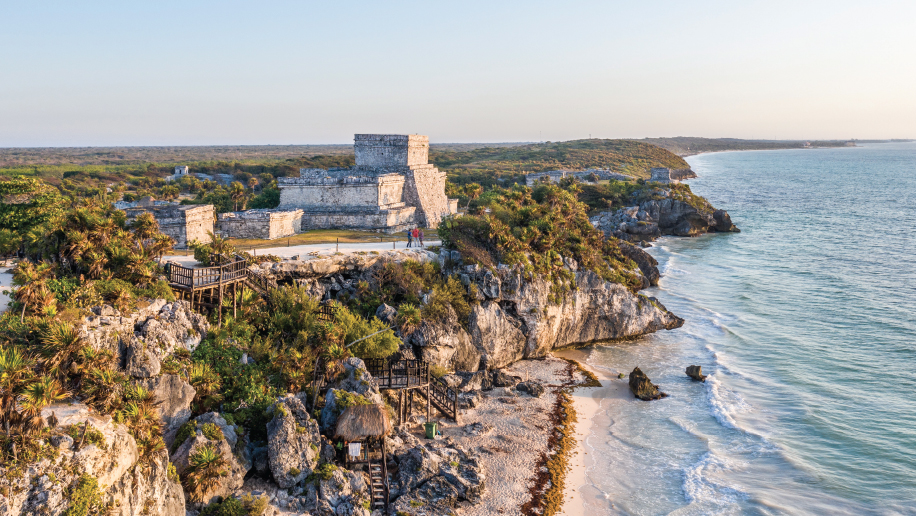 One of the most evocative sites – and sights – of Mexico’s Riviera Maya is El Castillo. Its pale gray stone blocks stand high above a sandy beach edged by palm trees swaying in the breeze, its façade impassively looking out to the Caribbean Sea. The surrounding temples once protected ships with power from a god whose followers have long departed, and whose rituals have been forgotten.

Well, almost forgotten, although experts have made educated guesses. Information boards with QR codes allow you to read in great detail about the past and purpose of the ancient Tulum site. And, just as historians had to clear trees and bushes from the area to reveal its hidden buildings, so, too, do these boards clear away a lot of misconceptions.

For instance, El Castillo isn’t a castle – more probably it was a temple and visual guide for sailors seeking an entrance through the coral reef to the coast. The name of Tulum, meanwhile, merely refers to the protecting wall around the town. The settlement may well once have been called Zama, which means City of Dawn – appropriately enough, since it faces sunrise.

Having a guide, either for the day, for a few hours or simply the pre-recorded kind you can listen to via headset allows you to look for the clues of how these gods were worshipped. While it’s possible that there was human sacrifice – memorably (and bloodily) depicted in Mel Gibson’s film Apocalypto – the undulating parkland, sandy coves below and cooling sea breezes make it very easy to forget any such unpleasantness.

The virtual guide told me that the style of architecture was called “East Coast,” typified by “the use of miniature temples, shrines within shrines [small buildings inside larger ones] and buildings with intentionally collapsed walls.” I liked the idea of the last of these, even if I had no idea what it meant. The plain gray buildings were once decked out in bright colors and wall paintings, now lost, although some sculptures are still just about visible.

The advice for this tourist site, as always, is to get there early, before the heat and the crowds, so you can wander around in a daze, imagining what it must have been like to live here, before having all of those daydreams shattered by the research relayed to you by the experts. Leave the impressive but expensive gift shop, as well as the Starbucks, until your departure, swerving the arrival of the tourist minibuses and coaches.

The Tulum ancient site welcomed more than 1.5 million visitors in 2019. While numbers were hit by the pandemic in 2020, it was still receiving well over 100,000 each month this year. It’s easy to see why. It is charming, hugely historical, enjoys a beautiful setting and also allows you to explore more of the coast if you are staying in Cancun (located 80 miles north), including the chance to stop off at luxury resort complex Mayakoba on the way back.