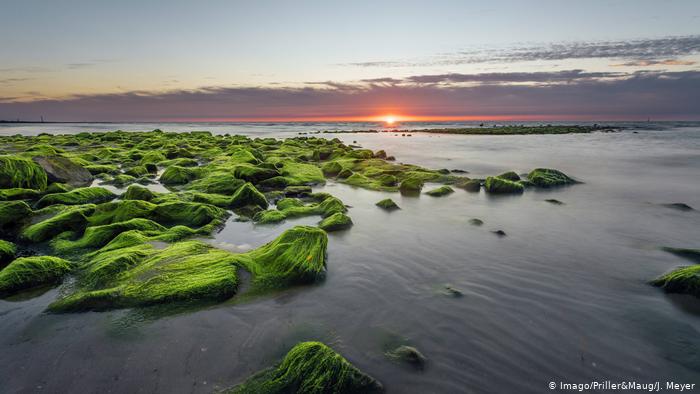 As sea levels rise, the planet's natural bulwarks against the ocean could help protect the coastline. But these very habitats are also under threat.

By
DW Made for minds.
Section:
Science
Region:
Coastwide

More than a third of the global population lives within 100 kilometers of the world's coastline. But one stretch of coast can vary greatly from the next, and as such, each faces different challenges as sea levels rise in our warming world. Widely understood to protect the land from the water, though, are the habitats that spring up along coastlines: mudflats, mangroves and salt marshes.

What are mudflats and why do they matter?

Mudflats are areas of land that are flooded at high tide and are formed by a buildup of sediment carried in by tides and rivers. Found all over the world in sheltered locations such as estuaries and bays, mudflats ­— also known as intertidal zones — are rich ecosystems that serve as breeding and nesting terrain for numerous native and migratory birds, as well as nursery grounds for many fish species. But they also provide a service to humankind, by acting as a barrier between land and the sea, thereby helping to prevent coastal erosion.

The Wadden Sea in Germany's Lower Saxony is also a national park and includes the East Frisian Islands, salt marshes and mudflats

Salt marshes are also typically found in coastal regions in some parts of the word. They tend to be found along the shores in cooler regions, and are dominated by salt-resistant shrubs and grasses that grow on top of deep mud. They are often found close to intertidal zones, and like mudflats, they protect against coastal erosion by breaking the intensity of waves crashing against the shore, while also serving as carbon storage.