Gulf of Mexico
The dredger Captain Frank removed the first sediment for the project on September 11. via Weeks Marine 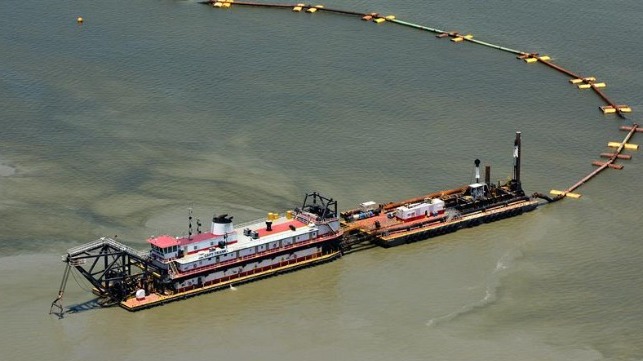 The long-awaited project to deepen the Mississippi between the Gulf and New Orleans is finally under way.

By
The Maritime Executive
Section:
Engineering
Region:
Gulf of Mexico

On Friday, the Weeks Marine cutterhead dredger Captain Frank pulled up the first sediment about five miles above the Head of Passes, kicking off the multi-million-dollar, multi-year project.

In Phase One, contractors for the U.S. Army Corps of Engineers will dredge out the shallowest segments of the channel to a depth of 50 feet, giving deep draft access up to 175 miles inland from the river's mouth - well past the Port of New Orleans. The first phase covers the entire jurisdiction of the Port of New Orleans, St. Bernard Port, Plaquemines Port and the majority of the Port of South Louisiana. The complete plan calls for dredging the river all the way to Baton Rouge, a distance of more than 250 river miles inland.

“This project represents an incredible partnership between the federal government, Congress, industry, and the State of Louisiana,” said Colonel Stephen Murphy, the commander of USACE New Orleans District. “By deepening the Mississippi River Ship Channel even by just five feet (to 50 feet) the national economy will see benefits to the tune of approximately $127 million annually.  With a benefit-to-cost ratio of 7.2-to-1, the project will pay for itself in two years."

The overall cost of the project is estimated at $240 million, including work to extend the deepening to Baton Rouge. The dredge spoils from the lower 30 miles of the channel will be used to restore about 1,500 acres of marsh habitat near the mouth of the Mississippi.