Gulf of Mexico
A dredge works through the night to clear shoaling along the Mississippi River at New Orleans in response to the prolonged high river discharges of 2019. Dredging of the lowest Mississippi River continues 24 hours a day, 7 days a week, except during perilous weather. Credit: Brendan Yuill 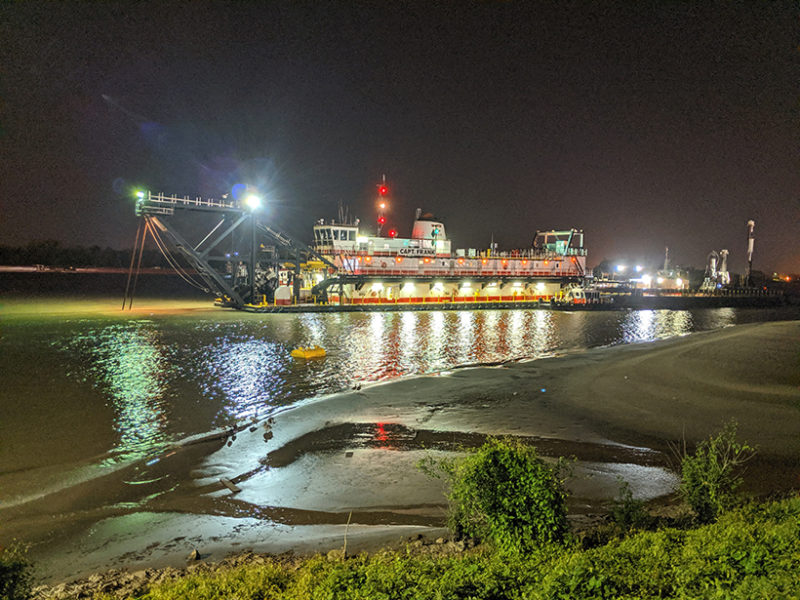 Changing climate and land use practices are bringing extended periods of high water to the lower Mississippi River. New management practices are needed to protect people, industry, and the land.

By June in most years, the water height of the Mississippi River in New Orleans, La., has peaked and is falling. But 2019 was not like most years. Winter and spring 2019 brought many stories of flooding in the Midwest, notably on the Missouri River and its tributaries, which eventually flow into the Mississippi. Even before the 2019 Midwest floods made the news, though, Mississippi River water levels were higher than usual in the New Orleans area.

The U.S. Army Corps of Engineers (the corps) monitors the levees regularly when river stage (water height) hits 4.6 meters (15 feet) in New Orleans, about 0.6 meter below flood stage. Water height on the Mississippi River remained high throughout water year 2019 (which ran from 1 October 2018 through 30 September 2019), exceeding the 4.6-meter level in New Orleans on 164 days (Figure 1). In contrast, there were just 49 such days in 1991, the previous record holder among data going back to 1990.

The vulnerabilities of current water management practices on the Mississippi River were readily apparent in water year 2019, when the unprecedented amount of water had a variety of effects, including stressing ecosystems and contributing to shipping accidents and disruptions. The water level was still elevated in July 2019 when Hurricane Barry moved into the Gulf and threatened to compound the situation with storm surge, which could have been catastrophic. The high water has continued into this year. In fact, as of 28 February, the Mississippi River had already exceeded the critical 4.6-meter monitoring threshold on 21 days in water year 2020, compared with 16 days by the same date in water year 2019. Since 1990, there have been only five water years (1991, 2005, 2016, 2019, and 2020) with more than 1 day above the 4.6-meter stage by 28 February. And with extremely high antecedent soil moisture and abnormally high snowpack throughout the Missouri River Basin this year, along with record precipitation regionally, the expectation is for yet more flooding along the lower Mississippi.