Gulf of Mexico
In this April 12, 2019, file photo, the flooded town of Pacific Junction, Iowa, is seen from above. Nati Harnik, Associated Press file photo 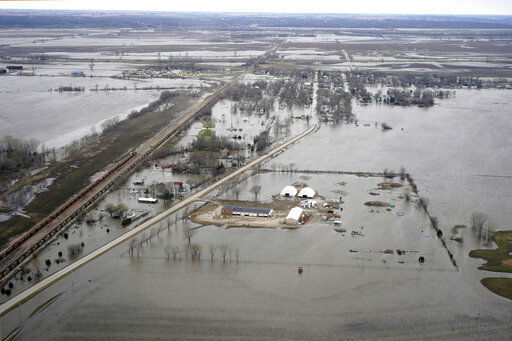 The stakes just got higher in the costly battle between hundreds of landowners along the Missouri River and the federal government.

The law firm that has successfully sued the government over flooding caused by endangered species projects filed a second lawsuit Wednesday that opens the door for more landowners to claim damages.

About 400 landowners signed onto the first lawsuit, the mass action Ideker case that has been going on for about eight years. This latest case is a class action lawsuit intended to allow those who didn’t join the first lawsuit to get compensated, said Dan Boulware, attorney for the Polsinelli law firm. The difference between a mass action and class action is that each individual plaintiff has to prove his or her case under a mass action.

The number of landowners potentially eligible under a class action is unknown, Boulware said. In a mid-December ruling in the Ideker case, U.S. Court of Federal Claims Senior Judge Nancy Firestone said any other landowners had until Dec. 31 to lodge a claim. In the roughly two weeks since then, the firm was able to sign up 60-plus property owners, Boulware said.

Landowners should be paid for flood damage along Missouri River, judge rules

“It’s been an outpouring of people who want to join,” Boulware said. “We had to cut it off Wednesday to get it filed.”