Gulf of Mexico
Historically low snowfall in the plains and mountains in the Missouri River Basin, as well as tributary runoff, has contributed to less water in the reservoirs that feed the lower Missouri River. Due to those reduced levels, the Army Corps of Engineers shortened the navigation season on the Missouri River by about a week in 2022. (Julie Smith/News Tribune photo) 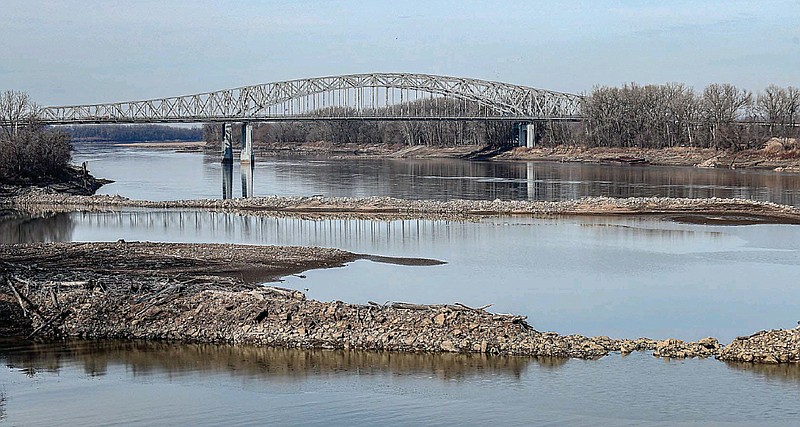 Historically low snowfall in the plains and mountains in the Missouri River Basin, as well as tributary runoff, has contributed to less water in the reservoirs that feed the lower Missouri River. Due to those reduced levels, the Army Corps of Engineers shortened the navigation season on the Missouri River by about a week in 2022.

But a lack of natural rain and snowfall throughout the middle of the country, coupled with the complicated structures and competing state interests governing the river, has resulted in declining river flow levels for the past couple of years.

The Missouri River has seen extreme weather conditions for longer, though, as cycles of severe flooding and drought plague the regions it carves through.

As a result, the Army Corps of Engineers and states in the lower Missouri River Basin -- Missouri, Kansas, Iowa and Nebraska -- are studying solutions.

The Department of Natural Resources is Missouri's lead agency responsible for environmental issues and water management, but it doesn't control the river. That falls to the Army Corps of Engineers, as the Missouri River touches seven states.

The Missouri River originates in southwest Montana and flows 2,315 miles to meet the Mississippi River just north of St. Louis.

Gary Kremer, executive director of the State Historical Society of Missouri, said Jefferson City used to have a "strong connection" with the Missouri River because it was integral for trade, traffic and recreation. The lower end of Jefferson Street, now the Jefferson Landing State Historic Site, was a commercial and transportation hub for the fledgling Capital City, he said.

Kremer, who previously served as the state archivist and taught history at Lincoln University and William Woods University, recalled seeing archived photos of horses and wagons traveling across a frozen Missouri River before a bridge was built.

That all largely collapsed throughout the late 19th and 20th centuries, he said. As trains and other forms of transportation were introduced to commercial supply chains, Jefferson City turned away from the river.

So has the river.

Buntin, who has worked on management of the Missouri River for 25 years, said the river system in place today was established in the early half of the 1900s when Congress authorized the construction of massive reservoirs in Montana, North Dakota and South Dakota.

Buntin said they were designed to respond to significant flood events and multi-year droughts. When it's a wet year, the reservoirs store water so it doesn't all travel down the river at the same time. When it's dry, they store water for times of need.

The Army Corps of Engineers releases water from the six reservoirs according to the Master Water Control Manual, which outlines thresholds for when water should be released down the river. Those thresholds are based on water levels in the reservoirs.

Buntin said the Missouri River acts like a lake in many of the reservoir states. Over the course of decades, many were developed for recreation with the addition of marinas and other facilities.

Gavins Point Dam at the border of Nebraska and South Dakota is the most southern dam on the Missouri River. Its construction in the 1950s created Lewis and Clark Lake -- a reservoir that has since become one of the most popular recreation spots in the Great Plains with more than 2 million annual visitors, according to the Corps. The lake is marketed for camping, fishing, hunting, hiking, sailing, swimming and bird watching, among other activities.

"They're not interested or they typically try to avoid those reservoir levels dramatically changing," Buntin said of the Corps management of the river upstream. "From Missouri's perspective, the problem with that is those reservoirs were designed to pretty dramatically fluctuate depending on whether we were in flood or drought."

And there's a drought.

According to the U.S. Drought Monitor, nearly half of Missouri is experiencing abnormally dry conditions and an estimated 615,824 Missourians are experiencing moderate to severe drought.

James Lowe, a spokesman with the Kansas City District of the Corps, said historically low snowfall in the plains and mountains in the basin, as well as tributary runoff, has contributed to less water in the reservoirs. Measures over the last year were about 75 percent of what they usually are, he added.

The reservoirs have received less runoff water every year since 2019, Lowe continued.

"Although we're seeing a lot of rain and snow right now, it takes a lot to catch up when you've been behind for several years," he said.

"When you start talking about that amount of water per second, it changes the level of the water," he explained. "The general reasoning for that is that there's so much less water in the reservoirs upstream that if more water was released now, we wouldn't have enough water to keep the channel deep enough for navigation for when that navigation season starts in the spring."

In response, the Army Corps of Engineers shortened the navigation season on the Missouri River by about a week in 2022.

The navigation season, which usually runs from late March to early December, allows boats and barges to traverse only the lower 734 miles of the Missouri River from Sioux City, Iowa, to St. Louis. More than 140 docks and terminals operate along the river.

"When we think about the Missouri River, we're thinking about it from a water supply perspective, a recreational perspective, a water quality perspective and a transportation perspective as well," Buntin said, adding the agency is in continuous contact with the Corps about water releases out of upstream reservoirs.

The Corps is now on a winter water release schedule, which Buntin said is a lesser flow not designed to support navigation. The amount of water flowing down the river should still support water supplies and power cooling.