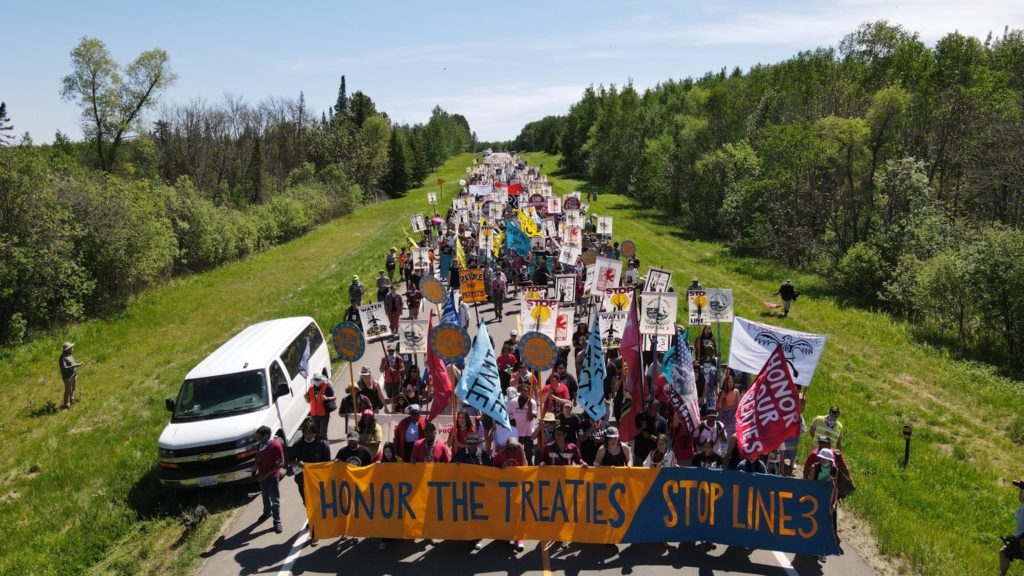 MN - Violence and resistance at the frontlines of climate justice

Despite months of struggle by water protectors, the tar-sands oil of Alberta, Canada is flowing through Enbridge Inc.’s controversial Line 3 pipeline in northern Minnesota. But for indigenous-led water protectors, environmental activists and concerned citizens who stood with them, the fight against the “black snake” is far from over.

Instead, actions have shifted from the forests, wetlands, rivers and fields along the 330-mile pipeline to courtrooms and government offices around the country. At stake now, say some activists, is not only the water and land, but also the right to oppose fossil fuel infrastructure projects in the future.

“This is the fossil fuel industry’s endgame. They know that the fossil fuel era is over, that people are going to protest any new infrastructure,” said Jo Christian, an artist and activist who spent time at Line 3 frontlines this summer. Law enforcement there subjected her to an excruciating “pain compliance” maneuver that dislocated her jaw and temporarily paralyzed part of her face.

“These tactics are definitely being used to scare us, they’re throwing everything at the wall to see what they can make stick. They’re trying to get people to be afraid of standing up for water, and they’re trying to make us afraid to stand up in direct action. That’s why they’re using pain compliance, felony theft charges, critical infrastructure, all of these egregious things. Clearly they’re afraid,” said Jo. She is charged with a felony and a gross misdemeanor for her actions in Minnesota, “because they see that we do hold power, and that they have to figure out a way to stop that.”

Jo has used her passion for circus arts, puppetry, and outdoor spectacles to draw attention to injustice, raise voices and build community through street theater organizations for 30 years. On the day in August that she went to the frontlines, Hubbard County law enforcement officers changed tactics with demonstrators.

Instead of extracting her from the site and arresting her, as was typical in hundreds of arrests for direct action, they first subjected her and others to “pain compliance.” The technique involves forcefully pressing fingers into an area behind the jaw where nerves that control sensation in the face pass through a narrow channel.

The maneuver — repeated numerous times — caused a burning sensation so severe that Jo said she and others screamed. Later, she compared it to the pain of childbirth. Left with partial paralysis of her face and a partially dislocated jaw, Christian was arrested and jailed. She now faces up to 11 years in prison.

Jo is one of more than 900 water protectors still facing legal action in the water protector movement, and police violence has not succeeded in its aim of stopping resistance.

A little over a year ago, construction on the Line 3 pipeline started and the first 22 water protectors were arrested shortly after that at an early action near the construction site. That day, indigenous-led water protectors had rallied to stop construction, protect the land and water, the habitat of wild rice, manoomin, a culturally significant food of the Anishinaabe, as well as treaty rights. Line 3’s new route crosses more than 200 bodies of water – including the Mississippi River, twice – and carries 760,000 gallons of dirty tar-sands oil a day.

On the anniversary of the first arrests, dozens of protests sprang up to mark the occasion by staging speeches, rallies, caroling parties and meetings with elected officials. They demanded that the U.S. Army Corps of Engineers undertake  a new federal Environmental Impact Statement (EIS) process. Hosted by groups such as the Fox Valley Sunrise in Green Bay, Extinction Rebellion in San Francisco, and Philly Water Protectors in Philadelphia, the organizers shared a list of grievances: included was the fact that Enbridge has already been fined $3.32 million by the Minnesota Department of Natural Resources for violations that occurred during construction. Additionally, they state, millions of gallons of artesian water are being lost due to the puncture of an underground reservoir during drilling for the pipeline. Organizers also noted, the pipeline construction violates U.S.-Anishinaabe treaties. To complicate matters, the pipeline carries the carbon emissions equivalent of 50 new coal-fired plants in a time of “code red” climate emergency.

It was around 30 degrees in Green Bay, Wisconsin – a rather warm winter day – when participants in the Day of Action marking the anniversary met to picket and sing in front of the Army Corps of Engineers. Grace Quinn, an organizer with Sunrise Fox Valley and a water protector who had been on the frontlines last summer said,