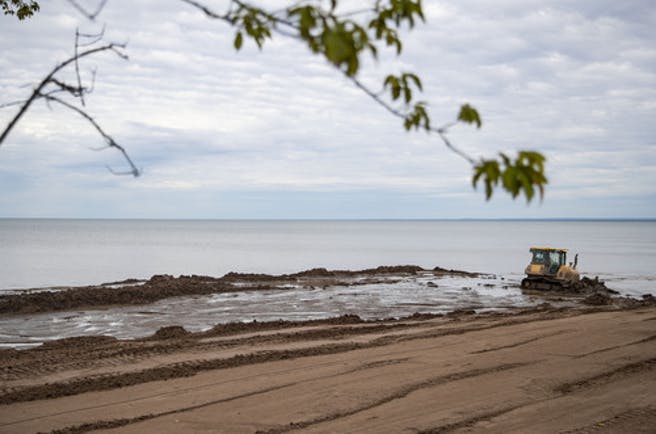 DULUTH – Mayor Emily Larson is asking the Army Corps of Engineers to investigate whether the federal agency's maintenance work on shipping channels could have caused shoreline erosion on Park Point.

The move marks the first step in a long process that could potentially lead to more permanent fortification of the 6-mile sand spit, which is also known as Minnesota Point and home to 300 homes, hotels and businesses that have been threatened by storms and rising water levels in recent years.

The request also follows the discovery of shards of decades-old aluminum cans on Park Point's beach from a recent dredging project intended to temporarily bolster the shoreline.

"We have a very serious and very chronic problem with severe beach erosion," Jim Filby Williams, Duluth's director of parks, properties and libraries, said at a news conference March 26.

On March 12, Larson sent a letter to the Army Corps requesting a Section 111 study, a federal program focused on preventing and mitigating the impact that navigation projects have on coastlines.

Filby Williams said the Army Corps has signaled its support for the study, which could cost more than $500,000 and would require federal approval to launch.

"The study, if approved, will give us an invaluable insight on the long-term trends of our beaches if we take no mitigating action, and it will help us to develop and assess a variety of actions so that we can come up with a solution that's environmentally sound, that's cost effective, that we can rely on in perpetuity," Filby Williams said.