Great Lakes
The Mesabi Miner pulled into Duluth Harbor on Tuesday as a bulldozer pushed dirt along Park Point as part of an effort to raise the beachfront. Alex Kormann / Minneapolis Star Tribune 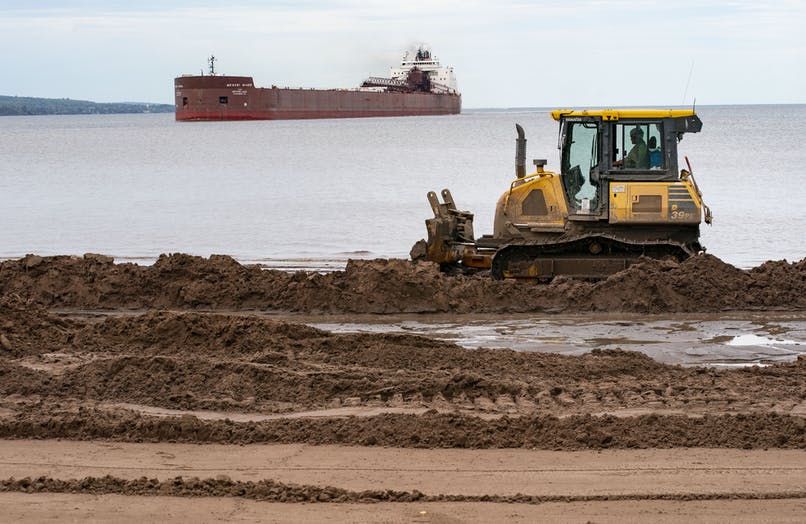 The answer is in a legal document from the 1970s that no one can find.

Over the past two years, the U.S. Army Corps of Engineers has dredged up tens of thousands of cubic yards of sludge, mud and sand from the bottom of Duluth Harbor and dumped it along the Lake Superior shoreline to try to raise beach fronts and protect homes from record high water levels.

It all may have been illegal.

The Minnesota Conservation Federation and the state of Wisconsin sued the Army Corps in 1976, the last time it tried to use dredgings from Duluth Harbor to bolster the shorelines of Lake Superior. The case was settled in federal court shortly before it was set to go to trial. That settlement document, however, seems to have disappeared.

Regardless, it remains in place today and prohibits dredgings from Duluth Harbor — polluted with heavy metals — from being exposed to Lake Superior or its beaches, said retired lawyer Grant Merritt, who was Minnesota’s first Pollution Control Agency director and represented the Conservation Federation in the case.

“It’s completely illegal,” Merritt said. “I could sign an affidavit as to what was said in that settlement. There is no doubt this was binding.”

The St. Paul District of the Army Corps of Engineers, which included Duluth at the time, is searching its archives, but as of Tuesday has found no record of it, a spokesman said.

No agency or court in Minnesota can seem to find the terms of that settlement either, as old court records have been filed away in federal archives. Judge Miles Lord, who signed off on it, died in 2016. The Corps’ Detroit district, which now encompasses Duluth, found no details on the case.

The U.S. District Court sent records of the case to an archive in Chicago. But that archive has been closed for months because of the coronavirus pandemic.

Meanwhile, dredging continues and Merritt has been racing to find proof that the settlement he helped negotiate back then is binding today.

“It’s ridiculous,” he said. “Has it been destroyed or is it in the national archives? If it’s there, let’s get it.”