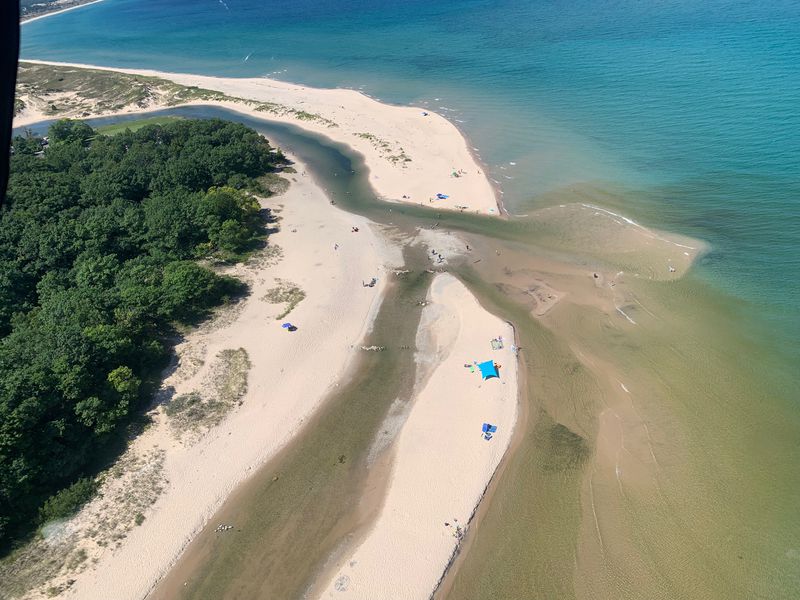 HONOR, MI — Who messed with Platte River Point? That’s what the National Park Service is investigating after the Platte River outflow suddenly shifted in a way that makes it easier for boats to access Lake Michigan.

The river, which winds through the Sleeping Bear Dunes National Lakeshore before entering Lake Michigan at Platte Bay, cut a channel this month through a long, sandy spit which had previously built up along its western bank.

The new flow pattern deepened the river mouth enough to ease access for boats from a nearby launch maintained by a local township, which wants the outlet dredged.

According to state officials and witnesses, the park service caught someone digging out the river mouth with a shovel. But park service officials refused to release details or elaborate on what they termed an “active law enforcement investigation.”

“There was a dramatic shift to the mouth of the Platte River last week,” said Scott Tucker, superintendent at Sleeping Bear. “Rangers and park biologists are assessing the situation.”

The park service issued a call on Friday, Aug. 26 for anonymous tips about the “illegal diversion.”

“We’re letting the feds handle this,” said Hugh McDiarmid, spokesperson for the Michigan Department of Environment, Great Lakes and Energy (EGLE). “Our understanding is that one or more people hand-dug with shovels, whatever they dug.”

The new flow pattern apparently began sometime around Aug. 15. According to a witness, that’s when authorities were called with safety concerns about motor boats attempting to access the lake through an area popular with beachgoers.

Platte River Point is one of the few remaining undeveloped river mouths or large creek outlets on the state’s Lake Michigan coast. It’s highly frequented but parts of the beach are restricted to protect nesting for endangered piping plovers.