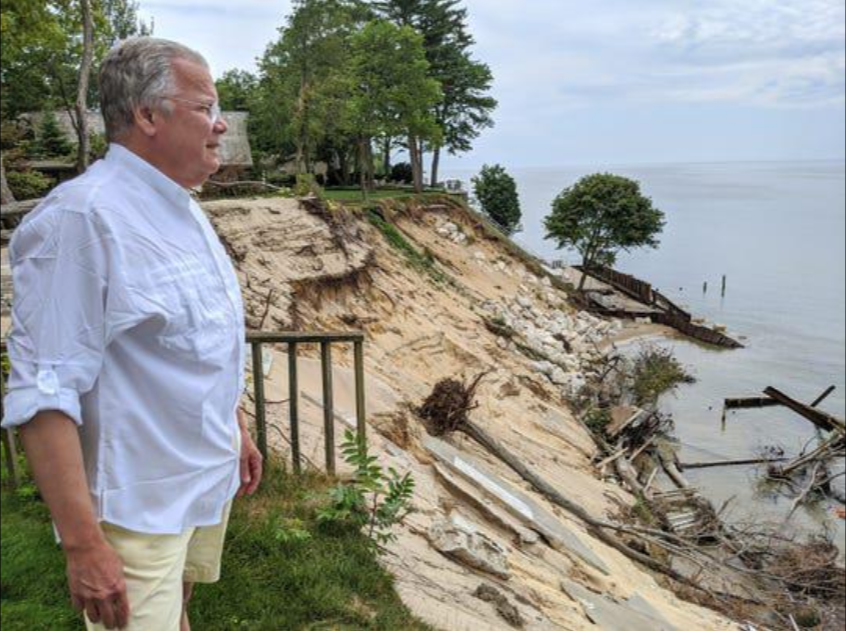 MI - Record-High Water Levels are a Nightmare for Homeowners, State

When Tim Lathe bought his home on a breathtaking bluff overlooking Lake Michigan in Park Township four years ago, it featured a large deck for enjoying Lake Michigan sunsets and a wooden staircase down a dune bluff to about a 10-foot-wide, sandy beach. Then the waters rose, and didn’t stop rising.

Lathe’s Lake Michigan beach is gone. That wooden stairway lies in a twisted, crumpled heap, collapsing just last month. It’s now among other debris at the bottom of a steep, 40-to-50-foot cliff, lapped by relentless waves, yet another casualty from the dune erosion that has taken away large chunks of Lathe’s and neighbors’ lakefront property. His teetering deck will be next.

Though he’s losing property in eroding chunks that’s worth about $13,000 a linear foot, and insurance won’t cover that loss, Lathe counts himself lucky compared to some neighbors. His home is far enough off the bluff that it is not at risk. One neighbor was forced to demolish his home; the other to demolish a portion of their house, as they began tumbling into the Great Lake.

“Some have completely lost their homes,” he said. “Others who have lost a significant amount of land have sold their homes, or have their houses on the market, at deeply, deeply discounted values. What was really a retirement paradise for a lot of people has become a nightmare, unfortunately.”

Though the high water that was coming in 2020 could be seen as far back as last fall, when the typical annual receding never happened, and many were better prepared for what was coming than last year, high water impacts this spring and summer have been just as widespread and severe as 2019, if not worse, officials with three state agencies told the Free Press. Lake elevation records continue to be broken, a trend that will continue at least on connected Lakes Michigan and Huron into fall.