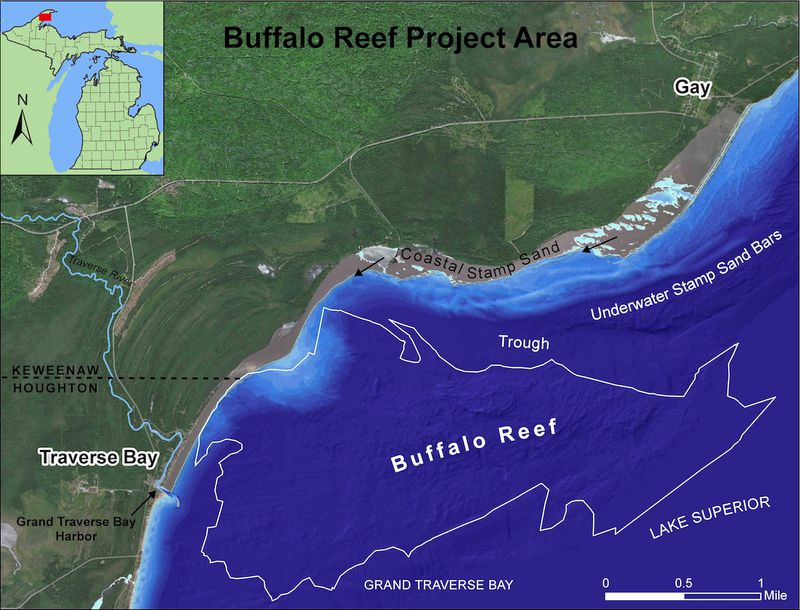 Since 2019, the task force has been developing plans to save Buffalo Reef, a 2,200-acre trout and whitefish spawning reef that’s being covered by “stamp sands,’ which is legacy mining waste that’s been slowly eroding along the Keweenaw Peninsula shoreline for a century.

The project will entail dredging the sands off the lakebed and either depositing them back in the original pile with a seawall built around it or building a new inland landfill.

Relocating the sands into an existing tailings basin at the White Pine Mine in Ontonagon County was considered among a trio of final options, but is likely too expensive, say officials.

The task force is leaning toward building a new landfill as its preferred option. State and federal officials say the effort is likely to exceed $1 billion in total cost.

The plans were winnowed from more than a dozen options developed starting in 2019.

“Though our plan has been selected, we still need to identify a nonfederal sponsor and funding source(s) before we can move ahead with implementing our strategy,” said Jay Parent, district supervisor for the Michigan Department of Great Lakes, Environment and Energy (EGLE) in Marquette. “The scope of our plan may also change as the project matures.”

The goal is to save Buffalo Reef and preserve its use for commercial fishing in the region as well as prevent the Traverse River refuge harbor from being filled in by the eroding sands.