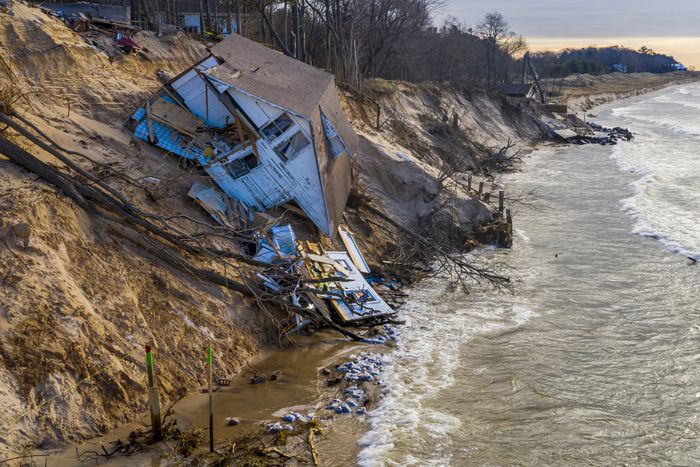 MI - As the Great Lakes surge to record heights, coastal areas face a time of reckoning

MASSENA, NY — The spillway gates are open at the Long Sault Dam on the mighty St. Lawrence River. Below, mist throws a tiny rainbow in the sunlight as the relentless force of water escaping five inland seas billows into a static roar.

Water rushing over the dam is an unusual sight. For most of its 61 years, the gates have been closed to divert the river flow to the dam’s electricity-generating companion, the Moses-Saunders Power Dam, about three miles downstream.

But these are extraordinary times along the Great Lakes. High water records are falling throughout the region less than a decade after the lakes hit record lows. Millions are being spent to combat erosion threatening homes and infrastructure. The annual St. Lawrence Seaway opening is delayed by efforts to drop levels on Lake Ontario — the first time in decades such efforts have impeded movement of goods on the lakes.

On the St. Lawrence River, dam operators are attempting to carefully drain Lake Ontario and, by extension, lakes Erie, Huron, Michigan and Superior in a complicated, and lately, controversial process that engineers liken to emptying a series of bathtubs through a straw.

“We’re the valve at the end of everything.”

That valve has been open wide this year. A mild winter and minimal ice cover helped the international agency which controls outflow pass record volumes through in January and February. The flow averaged 368,300 cubic-feet of water per-second through Long Sault and the Moses-Saunders dams during the initial weeks of 2020. For comparison, that’s more than four times the average annual flow over Niagara Falls.