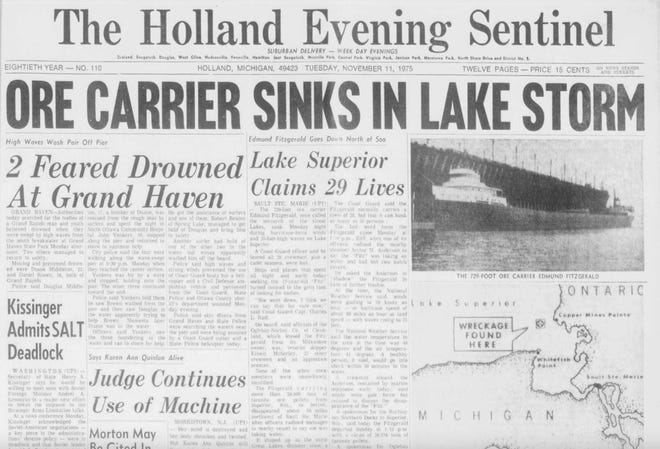 MI - As it happened: How local news reported the sinking of the Edmund Fitzgerald

NORTHERN MICHIGAN — Forty-seven years ago “the gales of November came early” to Lake Superior. The Edmund Fitzgerald, one of Michigan’s most well-known freighters, sank in the dark, choppy waters near Whitefish Bay on Nov. 10, 1975. All 29 people onboard were lost.

The tragedy has become famous, largely thanks to the Gordon Lightfoot song “The Wreck of the Edmund Fitzgerald” — and each Nov. 10 the Great Lakes Shipwreck Museum in Paradise hosts a ceremony to honor the lost sailors.

The tragic day is also memorialized in newsprint, as the story made headlines across the region, state and country.

The Nov. 11, 1975, edition of The Petoskey News-Review ran the story “Find no survivors of Fitzgerald.”

“The 729-foot ore carrier Edmund Fitzgerald carrying a crew of 28 and one apprentice seaman apparently sank last Monday in a fierce storm on Lake Superior that kicked up 25-foot high waves,” the article read.

“A Coast Guard spokesman in Sault Ste. Marie said there were no signs of survivors. In Cleveland, an official of the company operating the ‘Fitz’ said the ship carried 28 crew members, including the skipper, plus one apprentice. An official identified only the skipper, Capt. Ernest McSorley of Toledo, Ohio.

“‘They found no survivors,’ Wiard said. ‘We’re sure it’s from the Fitzgerald.’

“An armada of ships and aircraft, some flown from North Carolina, joined the search operations at dawn today. Other vessels spent the night crisscrossing the area, firing flares into the night for illumination.

“The first wreckage was sighted at about 4:40 a.m., EST, about 13 miles north of Whitefish Point and eight miles west of Copper Mines Pointe, Ont. near the area where the Fitzgerald disappeared.”