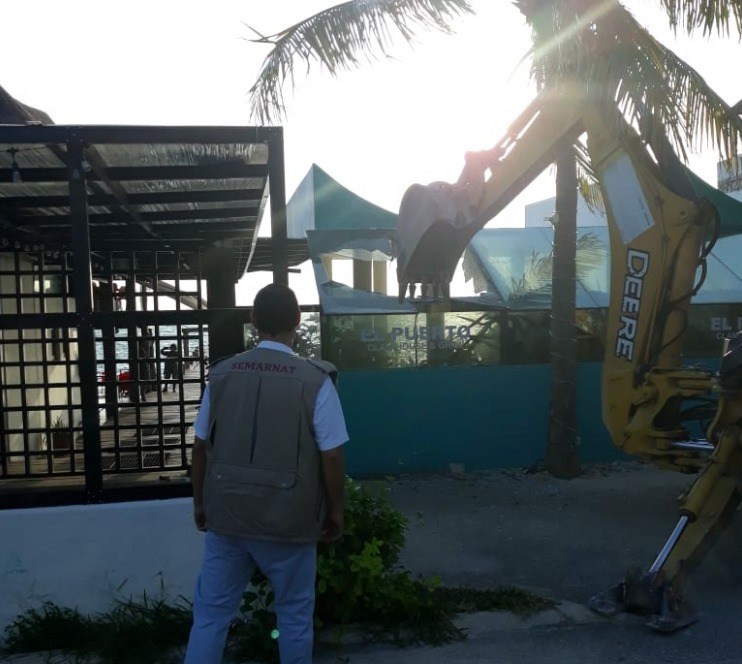 Isla Mujeres, Q.R. — Federal officials have demolished the facade of a hotel’s restaurant on the mainland of Isla Mujeres after the business failed to comply with a warning to open a public beach access point.

Rodrigo Hernández, the general director of the Zona Federal Marítimo Terrestre (Zofemat), says the facade, which belonged to the TRS Coral Hotel, was demolished to comply with the opening of a public beach access point in the Continental Zone of Isla Mujeres.

He says 80 linear meters of the hotel, which is located on the Chac Mo Chuc Beach, was demolished since its owners and administrators did not comply with the opening request for a free and dignified public access point.

In a press conference, Rodrigo Hernández warned that other hotels, including in the Cancun Hotel Zone and in Riviera Maya, have been notified to open public beach access points or else they will be opened by Zofemat with support from the National Guard and heavy machinery, as ordered by the government of Andrés Manuel López Obrador.

Last week, the federal government warned hotels and other businesses about blocking public beach access, saying they will initiate a series of warnings followed by litigation to force businesses in the Federal Terrestrial Maritime Zone (Zofemat) to open them.