Caribbean
(Photo : Twitter) #Bioluminescence glowing beaches return to #Acapulco for the the first time in 60 years!! The lack of human presence has benefited nature 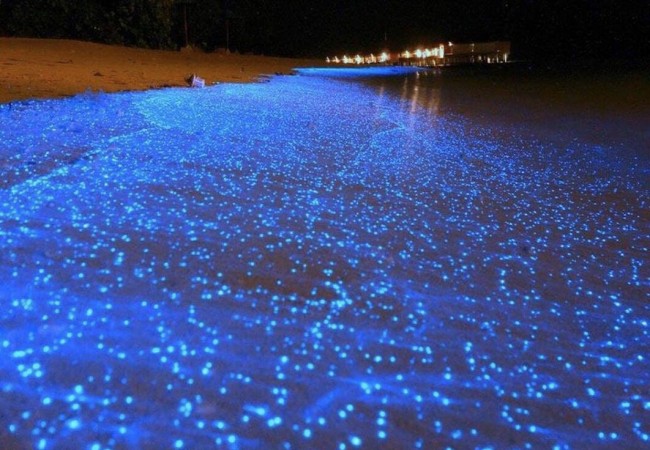 For the first time in 60 years, some lucky residents of Mexico walking along the Puerto Marqués beach in Acapulco were treated to a special light show when the shore lit up with bioluminescence on Monday. The rare phenomenon was the byproduct of a biochemical reaction caused by the bioluminescent planktons in the water.

Social media users shared online photos and videos showing the shoreline glowing in blue as the waves crash on the beach. Of Puerto Marques.

Some people in social media have linked the presence of the bioluminescent planktons to the lack of human activity. However, marine biologist Enrique Ayala Duval quickly dismissed that idea.

He wrote on Sabersinfin.com that the "bioluminescence is the light produced as a result of a biochemical reaction in which most of the time luciferin [protein], molecular oxygen and ATP [adenosine triphosphate] take part, which react by means of the enzyme luciferase in the following way: oxygen oxidizes luciferin, luciferase accelerates the reaction, and ATP provides the energy for the reaction, producing noticeable water and light at night."

One hypothesis that exist today on the presence of bioluminescence is that it is the result of evolution. When the Earth's atmosphere had an almost zero concentration of oxygen and it just gradually increases due to the increasing presence of photosynthetic organisms, organisms were released from oxygen, which was toxic to them and so the bioluminescence effect was produced in the water.

The most common among luminescent organisms under the sea are the marine bacteria. But some other marine species also use bioluminescence to attract their prey, detect predators or find mates.

Due to the nationwide lockdown in Mexico, visitors have been banned from bathing in beaches all over the country to prevent the spread of the deadly coronavirus. But one beachgoer could not forego this once in a lifetime phenomenon and decided to jump into the neon blue Pacific coast waters.