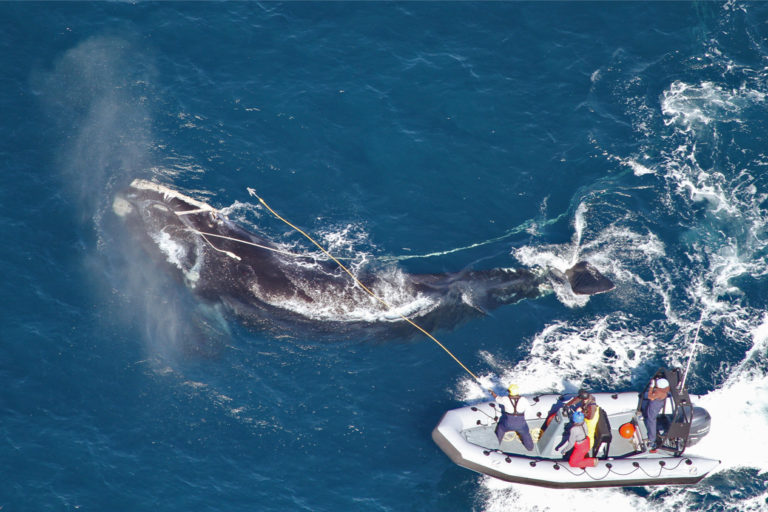 ME - Will 'ropeless' fishing gear be seaworthy in time to save endangered whales?

“Ropeless” fishing gear that minimizes the number of vertical lines in the water that ensnare right whales has emerged as a potential “home run” solution to the entanglement crisis. But fishers, industry groups and even ardent proponents of ropeless systems say that it’s not yet a viable replacement for traditional fishing gear in every situation.

The report came in from naturalists aboard a whale-watching boat: A 4-year-old whale calf was entangled in fishing rope. He appeared thin, and lesions mottled his body. A few days later, on Oct. 19, 2020, the aerial survey team was finally able to take off in their plane. From high above in their Cessna Skymaster, they scanned the waters below for the calf, taking advantage of a fog-free autumn day when the winds off the Cape Cod coast had tapered to a breeze.

The youngster proved elusive that day and hasn’t been seen since. But the relatively clear weather allowed the spotters from the Center for Coastal Studies in Provincetown, Massachusetts, to catch a glimpse of another right whale in distress. This one was an 11-year-old male named Cottontail, and he was dragging “hundreds of feet of rope” behind him. They relayed their observations to their teammates on shore, and soon, the center’s Marine Animal Entanglement Response (MAER) team was at sea, headed in Cottontail’s direction to try and cut him free.

Cottontail’s predicament is not unusual. Fishing gear around the globe takes an “incidental” toll on all manner of sea life that it’s not intended to catch, from sharks to turtles to seals, sea lions and other marine mammals. But North Atlantic right whales like Cottontail and the missing calf seem to be especially susceptible to getting bound up. Studies suggest more than 80% of them get entangled at least once in their lives. And the severity of the consequences for right whales has intensified in the past decade, threatening the survival of a species that could be down to fewer than 360 individuals, according to a research group called the North Atlantic Right Whale Consortium.

North Atlantic right whale (Eubalaena glacialis) numbers have been dipping ever lower each year for the past decade, and scientists declared a particularly stark hemorrhage in the population that began four years ago to be an “unusual mortality event.” Since 2017, 50 whales have died or been so severely injured that scientists believe they were not apt to survive. That loss of more than 10% of the estimated population in 2017 was mostly the result of entanglements or collisions with ships.