Northeast
City workers measure and record the depth of the water as Portland Pier flooded at high tide in Portland on March 22, 2019. At this point they said the water level was 24 inches deep on the pier. Shawn Patrick Ouellette/Staff Photographer 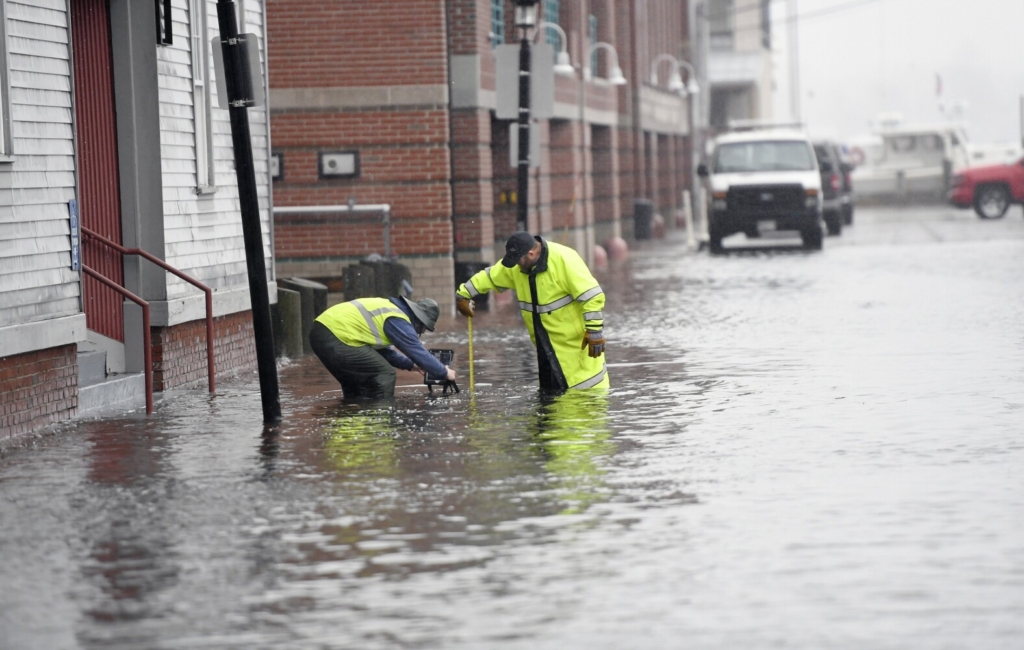 Ten Maine communities on Casco Bay are banding together to develop defenses against coastal flooding caused by climate change.

Over the next two years, the towns of Freeport, Falmouth, Cumberland, Yarmouth, Cape Elizabeth, Scarborough, Portland, South Portland, Chebeague Island and Long Island will invest a half million dollars on projects that harness the power of nature to defend against flooding.

Funding will be provided by the National Fish and Wildlife Foundation, which announced this week that it has awarded $250,000 to the Greater Portland Council of Governments for the regional initiative. The council raised an additional $250,000 in matching funds from the Gulf of Maine Research Institute, foundation grants and donations from municipalities.

“Now is the time to start planning for the solutions that will ensure our coast can be economically, environmentally, and socially resilient to current and future impacts,” Sara Mills-Knapp, the council’s sustainability program manager, said in a statement. “We know that nature-based solutions to flooding are essential to protecting habitats and communities, and GPCOG looks forward to supporting our municipalities in this important long-term planning effort.”

Similar planning for a rise in sea levels and storm surge was undertaken by the Southern Maine Planning and Development Commission on behalf of the towns of Kennebunk, Wells and York. The towns released their final report in July.

The assessment found that within the three towns, a total of 3,568 parcels, and over $645 million in property value, are at risk if sea levels rise just 1.6 feet – the level expected in Maine by 2050. The report recommends that towns take action now and start making plans to prepare for flooding.

The council’s project, which will take two years to complete, will attempt to engage people whose livelihoods are affected by coastal flooding. Participants will learn about data collection and analysis and research. The Casco Bay watershed comprises almost 1,000 square miles of land and is home to 20 percent of the state’s population.

The $250,000 awarded to GPCOG will come from the National Oceanic and Atmospheric Administration and the National Fish and Wildlife Foundation’s 2021 National Coast Resilience Fund. Nationally, the fund will distribute $39.5 million to 49 projects in 28 states and territories across the country, funds that will be used to protect coastal communities.

GPCOG is a regional planning agency funded by grants and 25 dues-paying member communities.