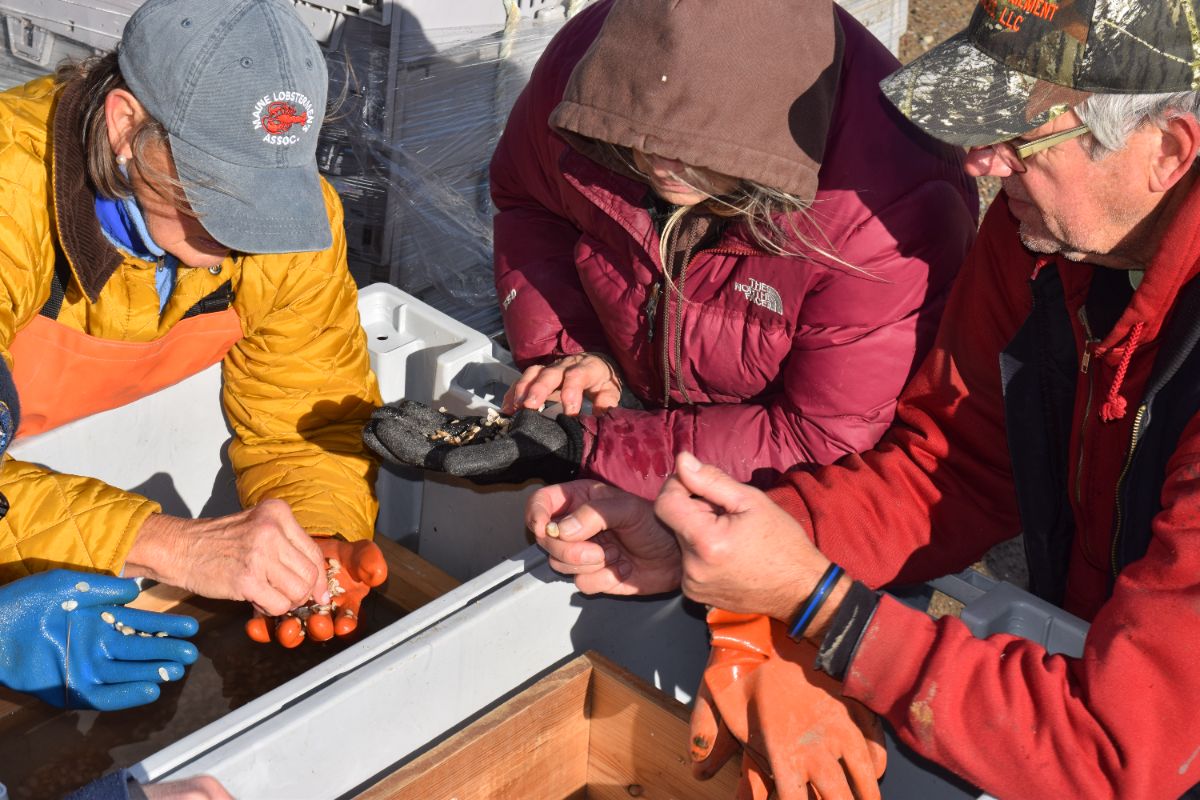 Community members last week made short work of transferring tens of thousands of young softshell clams from a former lobster pound, where they grew in floating, fine-mesh trays since early last summer, to Gouldsboro’s shellfish resilience laboratory in Bunkers Harbor.

Working outside the lab, housed in a former clam-buying station on the harbor’s eastern shore, 10 volunteers painstakingly sorted the quarter-inch-sized clams from live green crabs — both adult and minute — periwinkles and other marine matter that surfaced in the 10 wood-framed nursery trays removed from the former lobster pound in the inner harbor.

The crew improvised with old credit cards to cull through and extract live survivors from the Gouldsboro Shellfish Resilience project’s inaugural batch of 105,000 seed clams and transfer them into mesh bags and an awaiting circulating saltwater tank inside the completed two-room lab. The mesh bags are secured in wire-mesh cages inside the seawater tank. The juveniles, measuring 7.5 to 25 millimeters, go dormant and will winter over in the tank that is regularly replenished with fresh seawater pumped from Bunkers Harbor.

Gouldsboro Shellfish Warden Mike Pinkham and Schoodic Institute Education Research Director Emeritus Bill Zoellick estimate that about 33,700 clams survived of the Downeast Institute’s supply of 105,000 hatched seed clams placed late last spring in the predator net-covered trays in Bunkers Harbor. Back then, Pinkham said, those seed clams took up only half of a gallon-sized Ziploc bag, compared to their collective weight of 25 pounds this week.

“I consider it a success. I was worried whether there were going to be any survivors,” Pinkham said, listing green crabs and the lobster pound’s water temperature among the factors possibly contributing to the mortality of 70,000 or a third of the baby clams. “We knew going into this that it is an experiment, and we didn’t have all the answers.”

Without a doubt, though, green crabs were a significant factor, as they are in Maine’s other intertidal zones. An invasive species, the organisms are said to have traveled in the ballast water of ships sailing across the Atlantic from Europe in the mid-1800s. In recent years, coinciding with rising ocean temperatures, the green crab population has spread dramatically in coastal Maine.

As a result, green crabs have been voraciously feeding on and threatening softshell clams, blue mussels and other bivalve shellfish.

To further isolate the issues, and eliminate green crabs as a factor, Pinkham and Zoellick plan to raise half of next year’s new batch of hatchery-reared seed clams in mesh-bottomed containers inside the circulating saltwater tank. The Floating Upweller System enables the juvenile clams to filter-feed on plankton and other nutrients in the constantly circulating seawater without being exposed to predators in the wild. As they did before, the other half of the seed clams will be raised in trays floating in the lobster pound.

“We are doing this to learn and share with other towns,” Zoellick said.

Ultimately, the project’s immediate goal is to restore and conserve the town’s marine resource and the livelihood of its shellfish harvesters. It also aims to engage, spark the interest of and make local residents partners in the endeavor. Their clam campaign’s success was evident in the ample turnout at last week’s session to transfer the juvenile clams to their winter home.