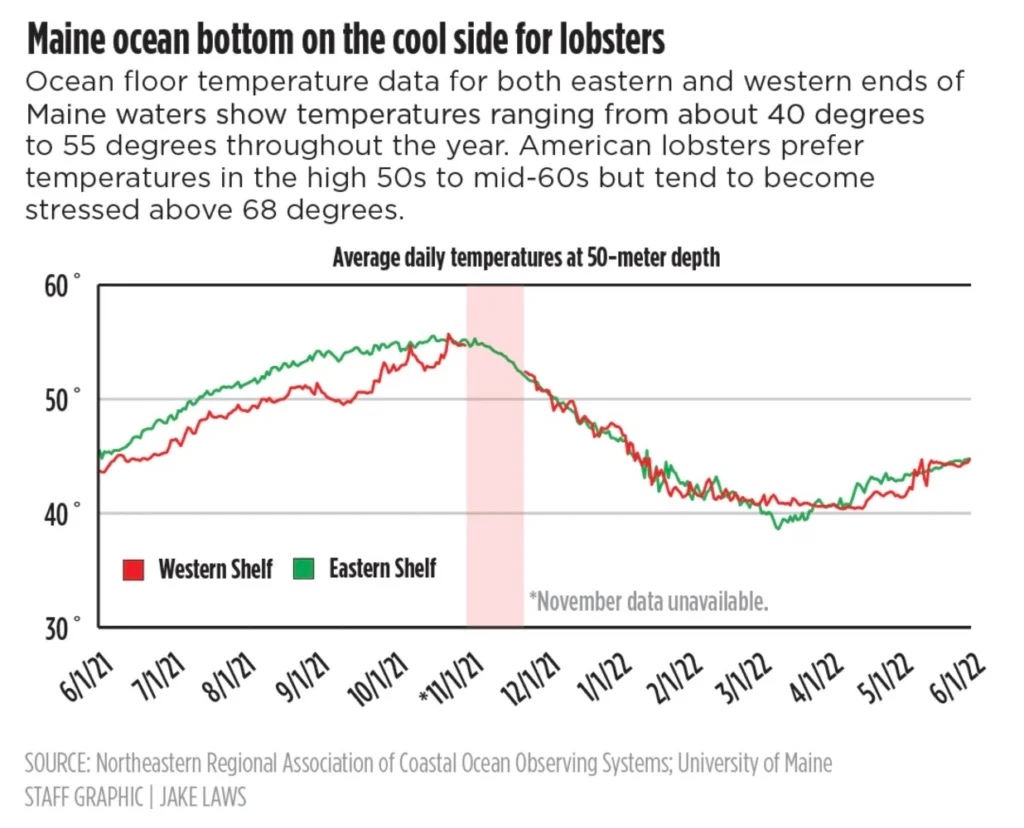 Dire predictions about the effects of global warming on Maine’s lobster population may be exaggerated and underestimate the potential that conservation measures have to preserve the fishery into the future.

Rapid warming in the Gulf of Maine and the collapse of lobster fisheries in southern New England have fueled predictions that lobsters will likely move north out of Maine waters in the coming decades. But ongoing research at the University of Maine is revealing a more optimistic long-term view of the Maine lobster fishery.

The UMaine scientists are now projecting that temperatures in Gulf of Maine will likely remain within lobsters’ comfort zone because of the gulf’s unique oceanographic features, though changing ocean currents are harder to predict. The researchers cautioned that the dynamics of global warming are complex and make it difficult to project far into the future with certainty.

Climate change to have drastic effects on Gulf of Maine lobster and clam fisheries, studies say

Ocean stratification – where water of different densities separates into distinct layers – is keeping the bottom temperatures colder on the Gulf of Maine’s western side, the scientists say, while strong tidal mixing in the eastern gulf and the Bay of Fundy helps moderate the water temperature there during the summer. Because Maine waters have historically been so cold, they say, even a couple of degrees of warming should keep Maine’s bottom waters below 68 degrees, the temperature at which lobsters begin to show signs of stress, according to the Atlantic States Fisheries Management Council.

Though average sea surface temperature in the Gulf of Maine broke the 2012 record last year, bottom temperatures remained much cooler. Data from the Northeast Regional Association of Coastal Ocean Observing Systems shows when sea surface temperature peaked at 72.7 degrees Fahrenheit in August at the western Maine shelf observation buoy, the water 50 meters below the surface was just 51.5 degrees there, and would peak at only 55.6 degrees later that year.

“No, it is warming faster,” Reardon responded, but she said even when taking warming into account, “hitting 70 degrees on bottom? That’s a really long ways away. In Maine, we still have a very, very different water temperature regime range than in southern New England, so yes, things are changing, but we are not, hopefully, likely to approach those really stressful temperatures in at least the next 50 years.”

In fact, the warming has brought Maine waters into the bottom range for lobster settlement, she said. Lobsters spend the larval phase of their lives suspended in the water column, feeding on zooplankton, and will only settle to the bottom in water between 12 and 20 degrees Celsius, or around 53 to 68 degrees Fahrenheit.

At the eastern Maine shelf observation buoy, temperatures ranged from 45.2 degrees to 55.3 degrees at 50 meters’ depth from June through November 2021, according to NERACOOS.

“Because water temperature has actually increased, this is actually a case where warming ocean has had a positive impact,” Reardon continued. “We have had more optimal conditions, and especially in eastern Maine, I think that’s what’s driven the increases (in lobster landings).”

Richard Wahle, a marine biologist and director of UMaine’s Lobster Institute, agrees. He leads lobster settlement surveys of the ocean bottom to determine how many lobsters are settling in different areas and publishes the results yearly in the American Lobster Settlement Index.

Wahle said that in the past couple of decades, the waters in eastern Maine have entered the low end of the thermal range for lobster recruitment, which led to a boom in lobster settlement from 2005 to 2008.