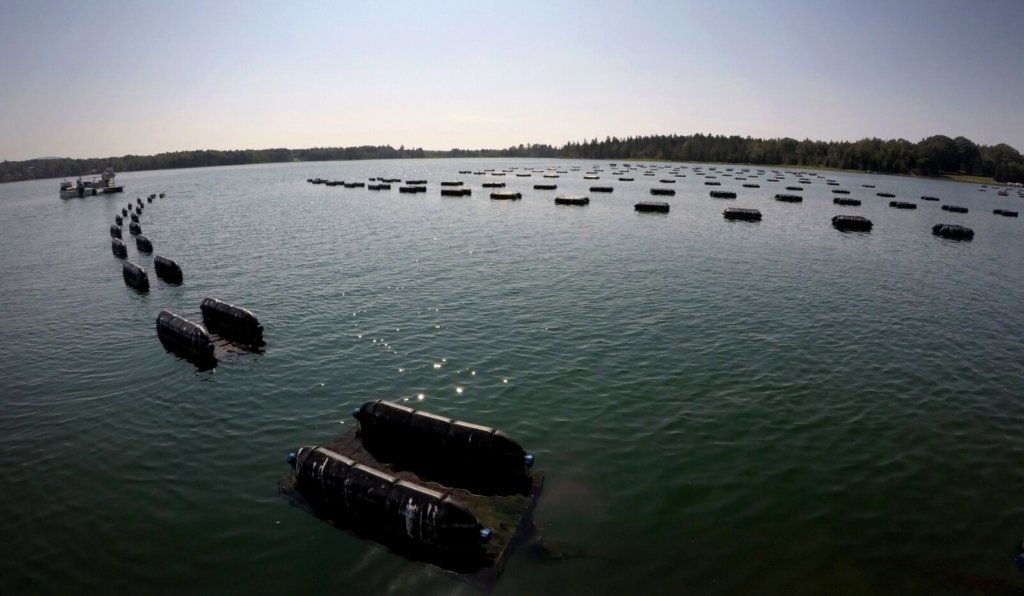 Many see seafood farming as a vital practice to feed the world, but others take issue with its environmental impacts.

Joanna Fogg, perched at the prow of her boat, looks out at the 350 oyster cages rocking in the Mount Desert Narrows that make up the bulk of Bar Harbor Oyster Co., the business that she and her husband, Jesse, have spent the past seven years building from the ground up.

The black plastic floats, spread across about 22 acres, may not look like much to some – and may even be an eyesore to others – but Fogg hopes that one day, people will see them as beautiful.

Her farm may not conjure the same quintessential working waterfront images as a lobster boat and brightly colored buoy, Fogg said, but she thinks it should hold the same meaning: “This is what it looks like to feed people.”

And feed people she does.

Even with a projected harvest of about 100,000 oysters this year, Fogg can’t keep up with the demand of Bar Harbor, let alone a state that is rapidly growing its brand as a premier destination for farm-grown seafood.

Fogg’s business is just one of the hundreds of Maine sea farms contributing to the state’s successful aquaculture industry, selling oysters, mussels, seaweed and salmon as fast as they can be grown. The practice has been around for thousands of years, but only in the past few has it become a vital economic engine for the state.

But as more farms have cropped up, so have coalitions and interest groups concerned about Maine’s coastline being overrun by industrial-size operations that pollute the state’s pristine waters and take valuable bottom from Maine’s iconic, nearly half-billion-dollar lobster industry.

In 2019, the last year of “normal” harvest and value data before the pandemic, Maine’s aquaculture industry had an estimated direct economic impact of $88.4 million and employed an estimated 622 employees – a nearly 15 percent increase in value over three years, according to data from the 2016 Maine Aquaculture Economic Impact Report from the University of Maine’s Aquaculture Research Institute.