Northeast
A charting correction by NMFS shifts the boundary of the LMA 1 lobster restricted area to now include 61 squares miles of the adjoining LMA 3. NMFS graphic. 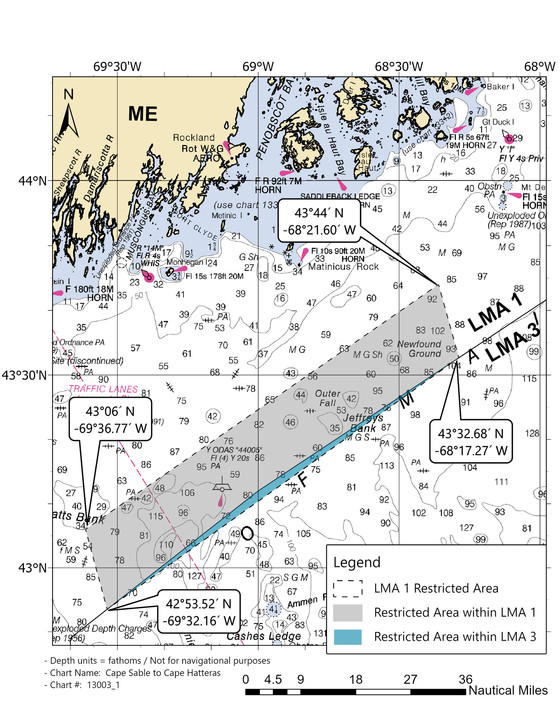 A charting correction by NMFS officials shifts the boundary of the LMA 1 lobster restricted area to now include a 61-square mile sliver of water in LMA 3, subject to the closure order through Jan. 31, 2021.

“We estimate that only one vessel may be displaced for a small number of trips in this sliver area based on a review of vessel trip reports from the last ten years,” according to a notice from the NMFS Greater Atlantic regional office. “The regulations state that the LMA 1 Restricted Area is bounded by the points identified on the map connected by rhumblines, which do not exactly align with the LMA1/LMA 3 boundary.

“The previously released outreach maps did not include this sliver area. We apologize for the error.”

The LMA 1 closure had been in contention, with the Maine Lobstering Union initially winning an order in federal district court delaying the Oct. 1-Jan. 31 closing. A First District appeals court overruled that finding, putting the closure back in place.

Right whales are on the move as winter arrives, with notable sightings in the New York Bight that prompted NMFS to issue go-slow advisories for vessel operators between Long Island and Delaware Bay. The agency posts report of recent right whale sightings and acoustic detections on its online WhaleMap.