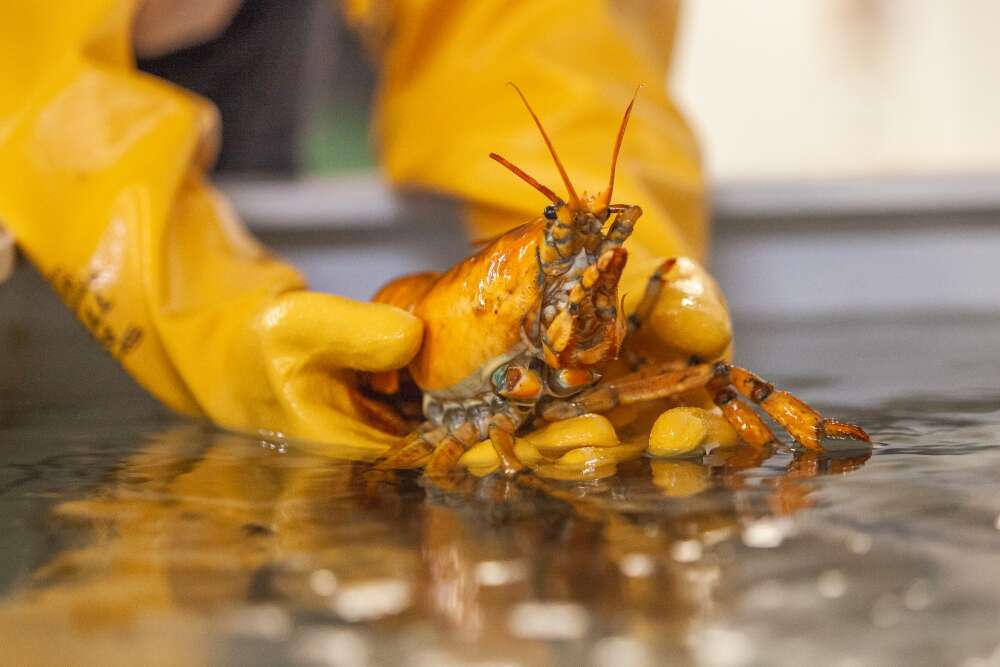 ME - Meet Banana, The Incredibly Rare Yellow Lobster That's One In 30 Million

Being described as one in a million makes us feel very special, so you can only imagine the ego on Banana the lobster, a rare yellow crustacean that is one in 30 million.

The snazzy marine critter was scooped up in the Gulf of Maine by Tenants Harbor lobster fisher Marly Babb who, statistically speaking, was three times more likely to become President of the United States than make the unlikely find.

Not one to hog the glory, Babb generously donated his extraordinary catch to the University of New England’s Marine Science Center, where the golden wonder was named Banana. Other rare lobster specimens come in yellow, blue, and white. The odds of catching a blue lobster are one in 2 million, which seems common as muck next to our one-in-30-million Banana. Blue and yellow lobsters are both the result of a genetic mutation in the proteins that bond with shell pigments.

"Crystal lobsters" have a pigment condition called leucism that makes animals appear pale compared to others. Interestingly, they're the only wacky lobster variety that don't turn red when cooked, which in typical specimens is the result of shell proteins unwinding in the heat and releasing the pigment molecule astaxanthin. In the case of crystal lobsters, Banana is unfortunately pipped to the post as these turbo-rare crustaceans are one in 100 million – that’s a lot of lobsters.

Banana’s debut comes at a poignant time in lobster science, as urgent research is being carried out into the impact that climate change is having on lobster larvae in Maine as the waters in the Gulf of Maine are warming at a faster rate than the rest of the world’s oceans. The consequences are widespread but the lobster industry in Maine represents a significant contributor to the local economy meaning the continuation of the population is of great importance to locals.