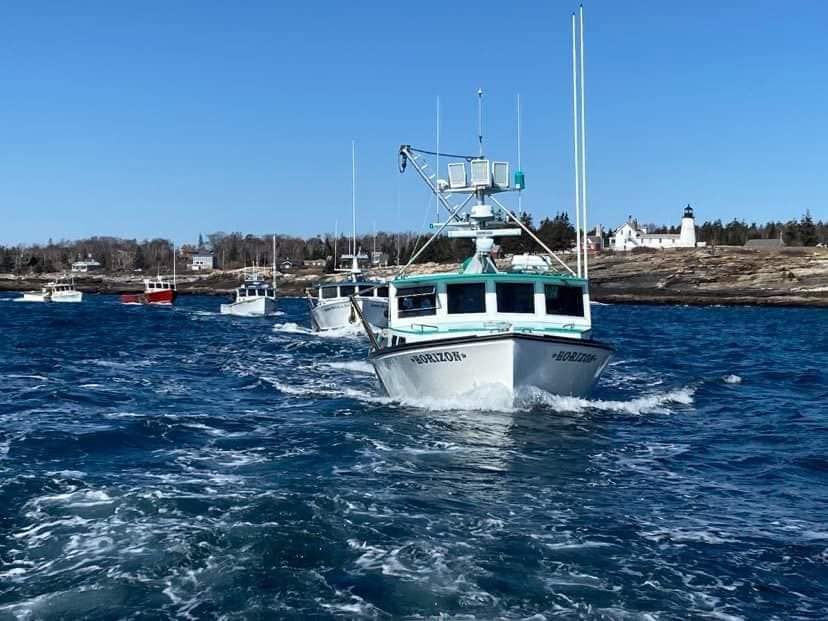 The Maine Aqua Ventus project would be a 12-megawatt floating turbine to test the feasibility of using such anchored generators to build commercial-scale wind power arrays in the deepwater Gulf of Maine. The survey now is over a 23-mile route where an export cable would carry electricity to landfall and tie into the mainland power grid at South Boothbay.

In a bulletin to fishermen Wednesday morning, state Department of Marine Resources Commissioner Patrick Keliher urged continued restraint in protests, after a peaceful demonstration Sunday by more than 80 vessels that cruised the cable route flying banners of protest.

“The purpose of this seabed survey is to map the seafloor in order to determine if the cable bringing power to shore can be buried. The purpose of burying the cable is to allow both mobile and fixed gear to fish around the cable without a problem,” Keliher wrote. “The developer has committed to working with the Department to ensure that fishing will be allowed around and over the cable route. I hope that we can find a way forward to complete this survey and achieve that goal.”

Organized by captains on short notice, the March 21 demonstration involved more than 80 boats trailing the route of a proposed export cable from the floating turbine site south of Monhegan Island to South Boothbay.

“It was very grassroots. It was a few guys who said, ‘We have to do something,’” said Dustin Delano, a Friendship lobsterman and one of the organizers.

“We’re trying to keep Maine waters free from this industrialization,” said Delano. “This would fill the ocean with anchors, cables and chains… Maine is unique in the nation. Our entire heritage is fishing and tourism.”

Beyond the Aqua Ventus project, fishermen are alarmed by state officials planning for a large array of up to a dozen turbines in a 16-square mile area farther offshore.

“Nobody knows what’s going to happen, and fishermen are being told, ‘We need this project to see how it will affect us,’” said Delano. So far fishermen have heard conflicting information about the Aqua Ventus installation — including whether they will be allowed to set gear near the turbine or cables, he said.

“We need that information to be 100 percent accurate,” Delano added.

With the covid-19 pandemic precluding in-person meetings between fishermen and wind developers,“for many of us, the outreach has failed miserably,” he said. “A lot of guys don’t even have a computer or tablet.”