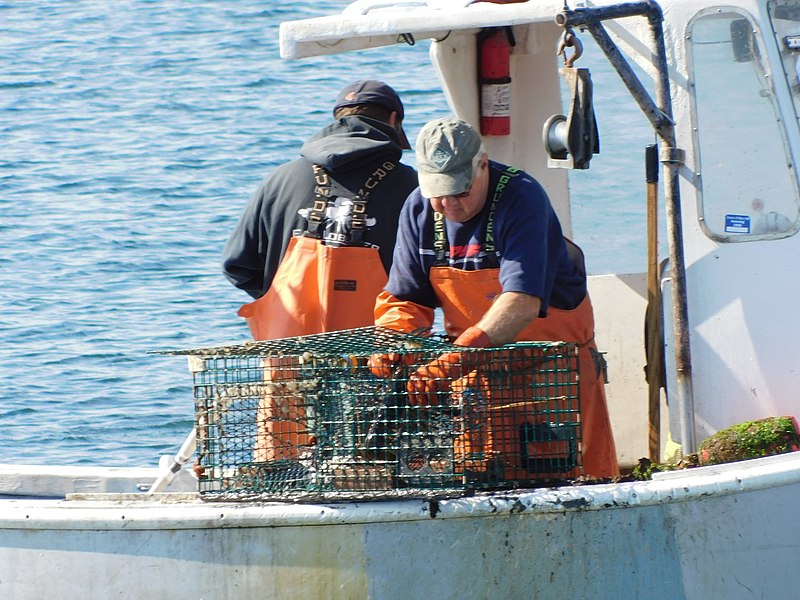 ME - Lessons for Maine lobster from Alaska’s crab collapse

What's happening to Alaska's crabs are a useful cautionary tale because of the economic and cultural ripple effects.

News broke last week that Alaska’s snow crab fishing season would be canceled for the first time ever, after the species’ stock suddenly suffered an apparent near-total collapse. Over the past three years, biologists say, 90% of the snow crabs that several dozen vessels go out to catch each winter in the Bering Sea have disappeared. It’s not yet clear why. Some suspect warming waters — snow crabs, true to their name, love the cold, and climate change may have pushed them into a pocket of water that didn’t have enough food to support their population.

More than one person has described Maine to me as the Alaska of the east. I have lived in both places, and I love their similarities — both huge, mostly rural, remote and wild, though Alaska is obviously an order of magnitude beyond Maine on all counts. Both are also traditionally dependent on a precarious system of natural resources, and reliant on timber, mining, tourism and, of course, seafood.

So these similarities came to mind when I read that the snow crab season had been canceled, as well as part of the king crab fishery, which has seen a similar decline. Could Maine lobster ever face this kind of sudden disaster?

“Snow crabs are a cold-water species that are highly sensitive to changing ocean temperatures, loss of sea ice, and bottom habitat availability for young to settle and grow. Other cold water species, like cod and lobster, have similar requirements and face similar risk of rapid population decline,” said Janet Duffy-Anderson, the chief scientific officer at the Gulf of Maine Research Institute and a former Alaska fisheries researcher. “Typically the factors that contribute to mass die-offs are multifold (fishing, ocean heat, poor survival of young, loss of older stages through predation or disease) and act together to create a ‘perfect storm’ of mortality.

“It can be difficult to know when this perfect storm of conditions will arise, but marine heat waves, long, extended warming periods, disruptions in the food web, or changes in species distributions are all causes for concern,” Duffy-Anderson said.

Lobsters are now far more abundant in the Gulf of Maine and Georges Bank than in Southern New England, where warming waters have already sent the fishery into steep decline. The Gulf of Maine is warming faster, increasingly so, than almost any other part of the world’s oceans. Southerly species are moving in, and the change cuts both ways — like lobster, North Atlantic right whales, infamously endangered by lobster gear and shipping traffic, may also be following their food north from Maine into more dangerous Canadian waters.

There are so many economic and cultural ripple effects that flow from climate change in a place like Maine, where our lives are deeply entwined with both the land and sea. This is why I see the sharp decline in Alaska’s crab stocks as a useful cautionary tale.

When I lived up there for about a year and a half early in my career, I was a reporter for KUCB, the westernmost NPR station, in the city of Unalaska — on a remote, windswept island in the middle of the Aleutian archipelago, which divides the Bering Sea from the North Pacific and Gulf of Alaska. Unalaska is home to fewer than 5,000 year-round residents, seven miles of paved roads, a lot of grimy bald eagles and the famed port of Dutch Harbor — tops in the country for volume of seafood landings thanks to pollock, used to make everything from McDonald’s sandwiches to imitation crab. (Scallops make New Bedford, Mass., the top port by value.)