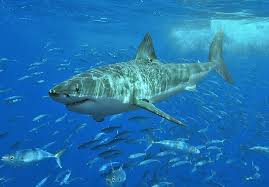 A federal law from the 1970s that’s led to a booming seal population is likely to blame in the fatal great white shark attack in Maine, according to experts cited in a new report.

The seal population along the northeast coast has been thriving since the passage of the 1972 Marine Mammal Protection Act — which makes it illegal to harass, hunt, capture or kill the marine animals, experts told the Portland Press Herald.

Officials believe the great white that killed victim Julie Dimperio Holowach, 63, may have mistaken her for a seal — because she was wearing a black wet suit. Experts also slapped down the notion that the killer great white came closer to the shore because of the warm waters.

“Understanding the effects of climate change on fish populations, including sharks, is an emerging area of study and a priority for NOAA [National Oceanic and Atmospheric Administration] Fisheries,” Tobey Curtis, fishery management specialist of NOAA’s Atlantic Highly Migratory Special Management Division, told the publication. “[But] there is currently no evidence that white sharks or other species are spending more or less time near shore as a result of warming waters.”

He added, “There is also no reason to suspect warming waters would bring more white sharks to the region; they are already there.”

Curtis said great whites have popped up along the Maine coast for years.

Sharks, meanwhile, are protected by the 2011 Shark Conservation Act, which strengthens the ban on shark finning — which involves cutting off sharks’ fins and tossing the disfigured fish back into the water to die.