Northeast
A North Atlantic right whale feeds on the surface of Cape Cod Bay off the coast of Plymouth, Mass., March 28, 2018. (Michael Dwyer/AP) 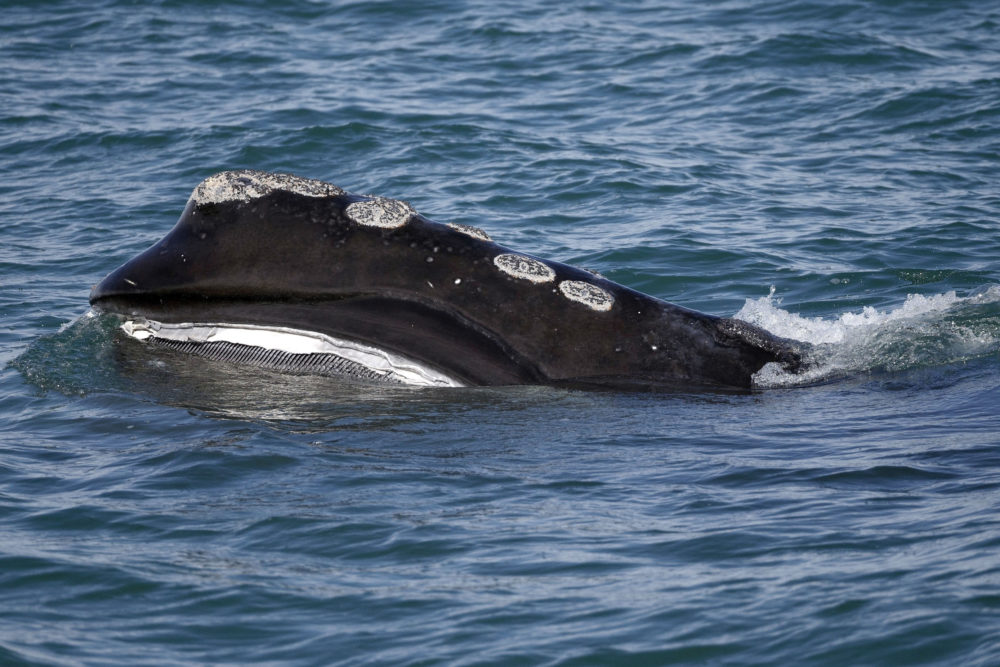 ME - Endangered whale numbers may be stabilizing after some bad years, but their future remains uncertain

North Atlantic Right Whales have long been highly endangered, but so far this year, they are faring well with the changing patterns of their seasonal migration.

No dead right whales have been spotted. Fifteen calves were born — the second-largest number since 2015. And observers were impressed by the saga of one whale, a mother who, injured and entangled in fishing gear, managed to escort her calf a thousand miles up the coast

WBUR is a nonprofit news organization. Our coverage relies on your financial support. If you value articles like the one you're reading right now,  give today.

And researchers continue to keep tabs on how the species is doing.

Michael Moore, a senior scientist at the Woods Hole Oceanographic Institution, recorded a recent encounter with a right whale off Massachusetts.

"Now the swells have dropped down and it's a couple hours before sunset and now the whale's leveling out a little bit, it just blew. You can see a little bit more of its back," he says in the recording.

"It's a small whale, maybe 30 feet long. A year, maybe two years old," he says. "A little whale lice on it. And its head is sticking out of the water at a fairly sharp angle, and you can see the rack of baleen hanging out of the roof of the mouth."

Moore is one of the researchers who documented the activities of some 260 individual right whales that showed up in Cape Cod Bay this winter — that's about three quarters of the estimated total world population of around 335.

"Cape Cod Bay has become a remarkably popular place for right whales. So obviously, they're not going elsewhere when we're there. And is that because Cape Cod Bay is so special? Or is it because the other places have got worse? And we just don't know yet. So that's, that's one of the challenges," he says.

The whales have been arriving in Massachusetts waters earlier each year, and staying later, feeding on plumes of tiny crustaceans called copepods that may be gaining abundance there. It's one element in an emerging shift from the whales' longtime migratory patterns.

They left the Cape in mid-May. Many headed east and north, with two sighted off New Hampshire late last month, and then dozens of sightings in Canadian waters.

It's unknown whether they are venturing near Maine at all: while there's been a smattering of sightings and detections relatively close to Maine's coast in recent years, there is no organized real-time surveillance in the area right now.

"So whales are looking in Canada, for food, when they used to be looking in the Gulf of Maine," says Nick Record, a senior scientist at the Bigelow Laboratory for Ocean Sciences in East Boothbay.

He says until just five years ago the whales dependably summered in the Bay of Fundy, right at Maine's maritime border with Canada.

But in recent summers, few have been sighted there. Instead observers have identified as many as 185 right whales further north in the Gulf of St. Lawrence. Record points out, though, that does still leave almost half of the population unaccounted for.

"We used to see almost all of them, not quite all of them, in the Bay of Fundy, eastern Gulf of Maine, places like that. And we just don't know where, if anywhere, they've landed yet. Maybe they're still looking around for their next Bay of Fundy," Record says.

Since 2017, a growing body of research by Record and others shows that climate-driven warming and changing currents are suppressing the abundance of the whales' preferred forage in the Gulf of Maine, including the Bay of Fundy.